A familiar face — on TV and at church

“I come from a very poor background,” he said. “We had very little when I was growing up. Grandma (Gertrude Andersen) was incredibly religious. I served Mass at St. Patrick’s in Menasha from the time I was 8 or 9 years old right up until I went into the Air Force when I was 23. I just loved serving Mass. I felt very connected at that time.” 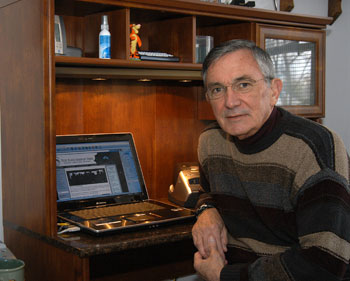 He said he considered the priesthood until he went into the service. While based in California, he quit going to church for a few years because economics demanded that he get a part-time job to supplement his income. He worked at a radio station on the weekends.

“Then I had an awakening one day,” he said. “I thought, ‘I miss church.’ so I went back. I like being part of a parish, and it gives me a place to reflect on my life, what I can do to improve it or to help somebody else.”

For years, Burke has contributed his talents and energies to assisting at his parishes.

“I was asked one time, and I said, ‘Sure, let’s take a swing at it,'” he said. He has been a lector at St. Mary’s, now part of Most Blessed Sacrament Parish, since 1983. He and his wife, Mary, also are extraordinary ministers of holy Communion.

“God gave me the gift to be able to speak publicly, so I’m using that,” Burke said. “I’m told people like it when I lector. They can hear me well. Apparently, I have a big loud voice and pronounce the words properly. There are some tricky names in the Bible when it comes to pronunciation. I’m always careful about pronunciations. When I was a journalist on television, if you mispronounce somebody’s name, your credibility goes right in the toilet. And I don’t want that to happen in church, of all places. I always go to (the pastor) when I have a question.”

Burke is also involved in preparing the church’s liturgical environment.

“St. Mary’s is huge, and decorating that thing is a challenge,” he said. “I refer it to as ‘the barn’ very affectionately because it’s so cavernous inside. It’s a beautiful site when it’s all trimmed up for Christmas. We did it last year in just over an hour, which is almost unheard of. When we’re done, my blessing is: ‘The barn looks pretty good when she’s all decked out,’ and they say, ‘OK we’re done.’

“We have such a loyal and good crew at the St. Mary’s site. They’re wonderful people to work with. Last year, even with a snowstorm, everybody still showed up,” he said.

Burke said that living his faith is more than just going to church on Sundays or helping out where he can. He had a benign brain tumor that presents him with physical challenges. But he continues to follow the sentiment in the Prayer of St. Francis.

“That prayer I say almost every day because it absolutely describes how I live my life,” he added. “Especially, I don’t need to be consoled. I should be doing the consoling. I could easily fall into that (wanting consoling), but I’ve got to remember that there are a heck of a lot of people who have it worse than I have it.

“It goes down basically to the golden rule. If you treat people with kindness, you will be treated with kindness in return. The church emphasizes that,” said Burke. “Some people can’t fathom how to be decent to people. I try to lead a life that would make Jesus proud. Have I failed him sometimes? Yeah, but overall I’m pretty proud of what I’ve done in my life.”

Burke added that he finds the greatest satisfaction in the smallest gestures. “What’s nicest is when little kids come up to me around town and say, ‘I know you from church.’ That’s better than being on TV. That’s cool.”