“One is to gather and support the ending of (immigration) raids,” she said. “We also think it’s very important to share (what) various leaders in our community think about immigration issues. In particular, what our faith perspective requires of us.” 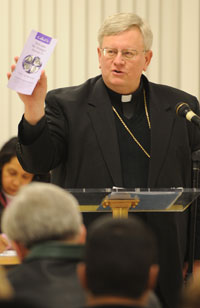 Bishop David Ricken holds a brochure published by the U.S. Conference of Catholic Bishops titled “Called to Welcome the Stranger Among Us.” Bishop Ricken quoted from the document in his presentation at St. Willebrord Church. (Sam Lucero photo)

Bishop David Ricken was among the panelists who spoke. In his presentation, Bishop Ricken described himself as a grandson of immigrants from Germany.

“We have this wonderful foundation of being a land of immigrants. If we trace our heritage back far enough, we all have ancestors who came here,” he said.

“Before this country was ever developed, we see what God has to teach us in the Book of Leviticus: ‘You shall treat the alien that resides with you no differently than the natives who are born among you. Have the same love for him as for yourself. For you, too, were once aliens in the land of Egypt,'” said Bishop Ricken.

“The rich experience of immigration in the United States provides us with an opportunity to practice what we preach, especially as people of faith and as Christian people,” he said.

Panelists also spoke about immigration raids, in Green Bay and around the country, and their impact on families and communities. The raids are conducted by the federal Immigration Customs Enforcement, (ICE).

The first raid happened in 1996 at a meat packing plant. “That really shook me,” he said, describing how those arrested were transported to Mexico.

“They loaded them on buses and they were taken away. Mothers and children came, crying and asking, ‘What are we going to do?’ They weren’t even allowed to give their (spouses or parents) money so that when they got to Mexico they could get home” to their communities.

Another raid happened about two years ago at a local restaurant, which employed many parishioners, he said. “They were part of our music ministry here. They were helping out in the parish, and they had wonderful families.”

Fr. DeGroot also discussed the largest and most recent immigration raid in the United States, which happened in May 2008 at a meat packaging plant in Postville, Iowa. Nearly 400 people were arrested and jailed. The town of some 2,300 people has not recovered from the raid, he said.

He quoted a parish minister from Postville, who wondered whether immigration raids do more harm – to people and to the nation – than good.

Green Bay resident Dionis Montero, a Dominican Republic native, described the challenges of seeking legal residency in the United States. He has worked for many years, spending thousands of dollars, trying to bring his brother here legally. He said it is understandable why so many people circumvent the legal process and enter illegally.

Green Bay Alderwoman Celestine Jeffreys, speaking on behalf of Mayor Jim Schmitt, told the audience about a resolution adopted in 2008 by the U.S. Conference of Mayors. The resolution called for the president to issue an executive order ending immigration raids and deportations until comprehensive immigration reform is achieved.

Erika Sanchez, a member of St. Willebrord Parish, invited guests to sign a petition to end ICE raids. The petition is addressed to President Barack Obama and echoes the Conference of Mayors’ request.  Guests filled out petitions and dropped them in a box at the meeting’s conclusion.

Among the guests signing a petition was Bishop Ricken.

Asked about the large turnout for the evening, Bishop Ricken said it demonstrated that “people are very passionately interested in this issue. They don’t want to see these ICE raids here in Green Bay. Especially the break-up of families, where they deport part of the family and part of the family stays. It also treats people like objects, like animals almost. We want to make sure that the principles of human dignity and respect are observed.”

Bishop Ricken also said he was impressed by the local church’s involvement in the issue.

“I think that’s part of our mission,” he said. “All of our teachings say we are to welcome the stranger among us as we welcome Christ. So when we treat someone who comes here from another country with dignity and respect, we’re really doing that for Christ himself. All of our tradition tells us that, and our Scriptures tell us, when we welcome the stranger, we’re welcoming Christ.”