Priest’s goal is to help Catholics ‘know your faith’ 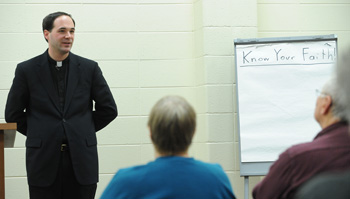 Q Tell me a little bit about the Know Your Faith series; how it started, when and why.

A When I was in college (at Lawrence University in Appleton), it was the first time that I had been challenged because of my Catholic faith. I had gone to Catholic grade school and Catholic high school. You get the impression that everybody in the world is Catholic, and then suddenly you go to college and you have people disagreeing with you. That hurt. I knew what I believed, but I didn’t know how to explain it to those who were saying I was wrong. I was so upset by that I just decided to start studying … what we believe as Roman Catholics. I learned so much that I just fell in love with the church and fell in love with theology. The more I studied, the more I thought about the priesthood.

After a number of years of discernment, I found myself in the seminary. One of the promises I made to the Lord and to myself was that if I were to be ordained, I would do adult education and teach people so that they could explain their faith to others, which basically is what apologetics is – a reasoned explanation of the faith.

I was ordained in 2002 and was at Nativity Parish in Green Bay. I was an associate pastor and I had the time to actually put together 15 one-hour talks encompassing basic apologetics of the faith. I gave that my first year as a priest and it was successful. Time went on and I had my new assignment where I am now with four parishes and I decided to repeat the 15-part series last year in Appleton.

Q So this is your third time around?

A Third time around. The first time was in 2002-2003, the second time around was last year, 2007-2008. This year we decided to condense it into one presentation and do it at six different places throughout the diocese. I’ve been to Sturgeon Bay, Plainfield, Two Rivers, tonight Green Bay, next month Oshkosh and March in Laona.

Q What’s been the reaction from people who attend these gatherings?

A There’s been a real hunger for this. People have been very intent and interested to learn more about the faith. People know what they believe and like to be able to explain it. Everybody has been touched, one way or another, by a loved one or a child or grandchild and perhaps even a spouse who has left their practice of the faith … and they want to have the tools to explain it.

Q What would you say are the common misconceptions that Catholics have about their faith and maybe even non-Catholics?

A I think a common misperception that Catholics have about their faith is that it’s unreasonable. In other words, that you just have to believe it because Father said, or my parents said, or that’s what they taught us in CCD.  The faith is very reasonable. There is a logical reason why we believe what we believe. Of course, there is a moment when we have to humble ourselves and believe things on faith, but God has given us a mind for reason and there are reasons why we believe and the Catholic faith is very reasonable.

The misperceptions (non-Catholics have) are all sorts of things; that we worship Mary, we worship the pope, that we worship bread. So I try to explain that the Catholic faith is reasonable and hopefully from there we can come to see that not only is it reasonable, but it’s the truth.

Q The U.S. Conference of Catholic Bishops states that adult faith formation must be a central catechetical mission of the church. Why do you feel that classes such as Know Your Faith are vital in keeping adults engaged?

A I think the challenge is that we continued a little too long on a model of faith formation for children and only children. That model for faith formation worked only if the parents back it up. It works only if they’re going to church. It works only if there is a moral history of a faith passed down from generation to generation. I think the challenge is, now, how do we educate generation to generation who have drifted? They know they are Catholic and they love their faith, maybe, but they don’t know why.

A lot of folks think, after they get confirmed or after they finish religious ed in high school, there’s no more to learn about God. What a poverty that is. There’s so much more to learn about the Lord and to deepen our faith. I think adults are hungry for that. The number one reason why Catholics leave the Catholic Church, if you ask them, is, “I wasn’t being fed,” which is ironic because we are the very church that has the Eucharist, which is the bread of life. So what do they mean by that? They mean that they weren’t taught about the word of God or to allow that to seep into the heart, to have a personal commitment to Christ, and also to be able to give a reasonable explanation of why they believe what they believe. This is a way that we can continue to learn together.

Q You mention about a lot of Catholics who do turn to evangelical churches; are there things that we Catholics can learn from those folks?

Another thing is that many of these evangelical churches challenge the people to make a commitment to Christ. I think we as Catholics, there has been a sense that, in preaching and in teaching, the people have not been challenged to live their faith. More of an assumption has been made that, “well you’re Catholic, just kind of go through it,” rather than to be evangelized and make a commitment to Christ. That’s very attractive.

Q Has the church made strides in adult catechesis?

A I think there’s great strides being made in our own time and in our own diocese especially … but there’s a lot more work to be done. The adult education things we’ve done at my own parish in the form of parish missions, we get 200 people a night. I say, “Why do you come?” and they say, “We want to learn more about the faith.” People are hungry. They are not being fed, so we have to feed them.

Q Can you share an anecdote from one of your presentations, a reaction someone has offered about the presentation?

A It’s touching and it’s humbling when I hear this; and I hear it many times. A person comes to me and says, “You’ve made me proud to be Catholic again.”  That makes me very happy when I hear that, because we need to believe that we love being Catholic. We need be able to tell people that, to be able to say, “I love being Catholic, let me tell you why.” That’s my whole aim, the whole goal of my presentations.