Smits puts her faith into action 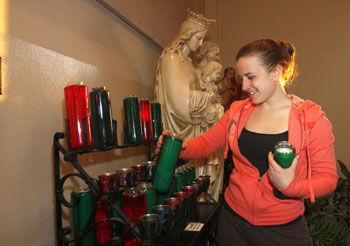 “They were getting ready for ‘the Crucible,’ which is the last task to graduate,” said Smits. “It’s a 54-hour task with sleep deprivation and food deprivation. Power Bars are the only thing they can eat beforehand for energy.”

Smits downplays her relationship with her brother, but admits that it was tough when he left home.

“When I saw his recruiter come to the house all dressed up, I broke down,” she said.

Smits decided to organize a bake sale at the church to raise money. She recruited volunteers to bake items and promoted the sale through parish bulletin announcements. Michelle Seroogy, a friend, helped conduct the event, which received a strong response from the parish community.

“We had it at the back of the church,” said Smits. “We had two tables full of baked goods at the Saturday Mass. People bought items before Mass, and we had a mob of people after Mass. We only had a few pies left and 10 plates of baked goods for Sunday.”

An emergency baking session lasted until 11:30 p.m. on Saturday.

Smits also created a card for Jordan, which parish members could sign. His picture was on display, and donations were collected in addition to funds raised through the sale.

“It was nice that a lot of people bought items, but also gave donations,” said Smits. “The little kids were really excited to sign the card. They thought it was cool to sign a card for someone who was going to be a Marine. I loved seeing their faces. I love kids and I’ve never seen them light up that much for a card.”

Smits was also touched by a comment from a veteran.

“He told me, ‘It’s really cool seeing someone your age trying to make a difference,’” she said.

Smits planned on having the bake sale after all the Sunday Masses, including the afternoon Spanish Mass, but ran out of items in the morning.

“We filled both tables again on Sunday, and it was a huge success,” she said. “When people noticed that I didn’t have any food left, they still made donations.”

While she hinted to Jordan that he may be receiving a package, Smits did not tell him about the project. She included notes with the energy bars.

“Drill instructors kept coming up to him to ask him, ‘Who is this Stephanie?’” she said. “It was a really good experience. I didn’t realize how just one person could have an effect on so many people. I found a lot of support and was able to get people to come together to help. It was a really cool experience.”

Smits said she likes being active at the parish. She is a former altar server, accompanies Tina on nursing home visits to distribute Communion, and helps her decorate the church for the liturgical seasons.

“I do the back of the church, the choir loft,” she said. “I do my own little thing with the fabrics. I have to do the candles in the back of church. It has to be a certain way, or it’s all wrong.”

She jokes that, until the bake sale, they were known as the “decorator people.” Parish members were able to get to know their family through the project. Many have offered prayers for Jordan.

He is stationed in Pensacola, Fla., but recently traveled to Oklahoma for the funeral of boot camp platoon member who was killed in Iraq on Dec. 27. The solider willed Jordan the responsibility of telling his family, and to be the first to touch the casket.

Tina said that her son rediscovered his faith in the military, including leading prayer sessions. While the death of his friend has been hard on him, she hopes he sees the honor in being a part of the funeral and benefits from the prayers back home.

“Two women at the bake sale told us how they pray when they walk each morning,” she said. “They said they were going to add Jordan to their prayers. We often pray for the soldiers overseas, it is nice that people are thinking about the new recruits.”

Smits is considering the military, possibly to study nursing in the Navy. She will be confirmed on Jan. 25, and even though it’s no longer required, she may have another bake sale in support of soldiers at boot camp.

“I thought I may raise $100,” she said. “I honestly didn’t think I would do so well. I may do it twice a year. I’ve thought about another bake sale or maybe a spaghetti dinner. I would like to do something to let them know someone is thinking about them.”