A marriage made in heaven

As a person with a busy life and a thriving career, Maurine, who is the coordinator of religious education and a liturgist at Sacred Heart Parish, didn’t know if marriage would ever be her vocation. Meeting John changed everything. “I first met John and spoke to him at a special event we have at church,” recalled Maurine. 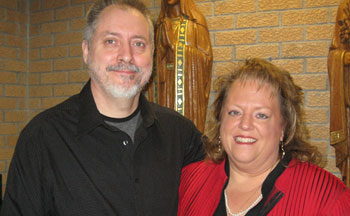 They were casual friends for several months until they got to know each other better at another church event. “It took very little time to know that this was exactly who I was meant to be with,” she said.

When Maurine left for a two-week mission trip, John prayed for her the entire time. When she returned he officially asked her out. “Our first date was Feb. 16, 2008, his birthday, and also the one-year anniversary of his father’s death,” said Maurine.

“His parents and his whole family are very involved in this church. We really believe that his father, Vern, had a lot to do with our coming together. He prayed for John to have this woman who would love him, who would be a faithful person.”

While his father was praying for him, John, who had been married previously, was doing just the same thing. “I prayed for my (future) wife for 13 years. I didn’t know it was going to happen but I think it happened because of my father. I see so much of him in Maurine. What she does for the church is so much what my father used to do. I think he passed away and put a good word in for us,” John said with a laugh.

John offered his version of their courting experience. “The first time I saw her, I just thought, ‘Oh boy.’ Then I tried to find more out about her, how she was with God. She was as crazy as I am for God so I thought, ‘That’s a gal I’d like to know.'”

By last May, the couple was engaged. Things moved along swiftly because they had conversations from the start about the things in life that were truly important to them. “Our faith is absolutely at the center. There’s no compromise there,” said Maurine. “That was something we both laid out on the table right away.”

Before they were married, both Maurine and John were very involved in their parish. “I was always active, either in the choir or some ministry like grounds keeping,” said John. “Then I met Maurine and she works at the church. She’s there 24/7.”

Volunteer service is a part of this couple’s life. “On our wedding day we gave food for the poor; we’ve given blankets to the warming shelter; we’re in hospitality ministry together and we’re in special choirs together,” said John.

“We want to work on doing some mission trips,” noted Maurine. “We’re both involved here at our church in a number of ministries and we want to build on that.” They were honored recently to be asked to be godparents for a parishioner’s child.

“In John’s wedding ring I had engraved ‘Love of God and love of neighbor.’ Those are the two things he always said ever since I knew him,” said Maurine. “In my ring it says ‘I Thirst.’

“Mother Teresa had a vision before her ministry began and that’s the word she used,” said Maurine. “I volunteered for the Sisters of Charity and in their place of prayer each day, there’s a simple crucifix on the wall and the words, ‘I thirst.’ I thirst to serve God, I thirst to serve my neighbor, in that I can only find fulfillment. I don’t think a day goes by that John and I don’t talk about the presence of the Holy Spirit and the grace of God in our lives. We thirst to serve our church, to serve our God, to serve those in need.”