Speculation about Archbishop Dolan’s departure to New York was fueled by a Feb. 4 story in the New York Times written by Laurie Goodstein.

“The talk has reached a rolling boil,” wrote Goodstein. She goes on to cite church sources who said an appointment is imminent, and that Archbishop Dolan is the leading candidate.

Cardinal Egan, who turned 75 in April 2007, has been waiting nearly two years for Pope Benedict XVI to name his successor. Bishops submit their resignation to the pope on their 75th birthday.

If the appointment comes to fruition, it will eventually lead to Archbishop Dolan receiving the cardinal’s red hat. As one of the largest and most important archdioceses in the world, New York’s archbishops (including the last six) have commonly been named cardinals of the church.

When Pope Benedict finally announces the appointment, and if indeed it is Timothy Dolan, it will make Shirley Dolan, the archbishop’s mother, quite the prognosticator.

In a special edition issue Aug. 22, 2002, Shirley Dolan told the Milwaukee Catholic Herald’s Scott McConnaha, “…we all knew archbishop was where he was going. We know where he’s going next,” she said with a laugh. “He’ll be a cardinal.”

Read the Catholic Herald story here. UPDATE: This link is no longer available. 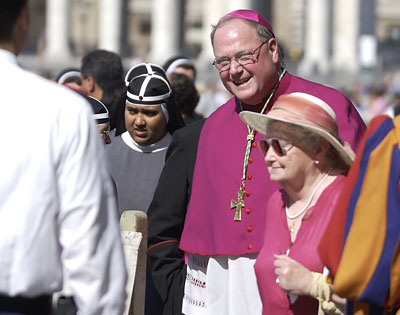 Archbishop Dolan is pictured with his mother, Shirley, at the Vatican

received his pallium, a vestment worn around the neck, from Pope

John Paul II during a ceremony at the Vatican. (Sam Lucero photo)