Could you walk away from a soccer career? 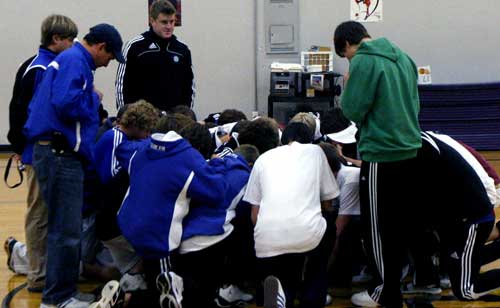 The Notre Dame Academy soccer team prays together during a Nov. 6, 2008, rally at Holy Family School in Green Bay. The rally was held prior to the Tritons departing for Milwaukee for the WIAA Division 2 State Soccer Tournament. Notre Dame won its second consecutive state title on Nov. 8, defeating Catholic Memorial of Waukesha, 3-2. (Rick Evans | For the Compass)

“I was thinking about if I could do what he did,” said Klingert, a member of Resurrection Parish in Allouez. “Bishop (Robert) Morneau talked about vocations. If it’s your vocation, it’s what you have to do. It’s dangerous to stray away from your vocation.”

“You really cannot know what he was feeling,” said Metzler of St. Matthew Parish in Allouez. “If it meant no longer playing a game that I love, it would have to be God telling me.”

Metzler added that Hilgenbrinck’s call to the priesthood could still allow him to be involved in the sport.

“Priests are not locked away from everyone,” he said.

Hilgenbrinck, billed as a former professional soccer player, appeared at an event hosted by Catholic Athletes for Christ following the March for Life, Jan. 22 in Washington, D.C. He has also returned to the field representing Mount St. Mary’s (Emmitsburg, Md.) in an inter-seminary tournament. His team won the championship.

Ribeiro, the Tritons leading scorer last season and the player of the year in the Fox River Classic Conference (FRCC), said that he appreciates playing the game in any venue. Achieving certain goals is secondary to his passion for the sport.

“When I came here as a freshman, I didn’t know anything about conference or state,” he said. “I just wanted to play. I love to play. For me, it’s 24/7. If I’m in my room at home, I’m juggling a soccer ball. I try to do homework, and I start heading the ball.”

In the fall, Ribeiro, an honorable mention all-state selection, will attend Creighton University (Omaha, Neb.) where he will study medicine and try out for the soccer team as a walk-on. Metzler hopes to play soccer at the University of St. Thomas (St. Paul, Minn.), where he will pursue a degree in electrical engineering. Klingert is considering UW-La Crosse and Carroll University. He’s interested in physical therapy, psychology or environmental studies, and may try out for the soccer team.

Speaking with the three student athletes, who along with Matthew Benes served as team captains, it’s clear that while they set out to repeat as state champs, they didn’t lose the enjoyment of the journey.

“It’s the experience,” said Ribeiro. “I love these guys. At school, at practice, we are a team. That was a huge component in our success. It’s not only the seniors, but everyone in the program.”

“We all love each other,” said Klingert, the first team all-FRCC goalie. “There is no separation. We are a team. We are a big family. It’s awesome.”
Reminiscing about their high school soccer experiences, all three point to working youth camps at Notre Dame as rewarding opportunities.
“It’s fun,” said Ribeiro. “They actually look up to you. I liked seeing the little kids so excited to play.”

“It’s weird to think that, a few years ago, that was me,” said Metzler.

Pre-game prayer was not only important to the team, but involved some particular routines. Klingert created the prayer schedule. The team would pray a Hail Mary followed by prayer led by a player.

“We formed a center circle,” said Klingert. “I had to get to the middle. I had to pray right in the middle.”

Klingert, Metzler and Ribeiro said they would like to return for Notre Dame’s alumni game in the future. They plan to stay in touch with teammates while in college.

“I will miss these guys,” said Metzler. “We won’t see each other as much, but technology and the forms of communication make it easier to stay in touch.”

Is a three-peat possible for the 2009 Tritons?

“I think we gained talent this year. It filled in,” said Ribeiro in reference to losing players who graduated from the 2007 team. “Somebody can just pick it up. They lose seven seniors, which is a lot, but I told them they have the talent.”