“Part of our recommendations, the list of things you can do to limit your risk of cancer,” said Pagel, “is limiting alcohol intake because it is a risk factor. It contributes to cancer.” Tobacco and alcohol use are worldwide risk factors. However, there are carcinogens that are more regional to northeast Wisconsin. These include radon, radium, arsenic and PCBs. 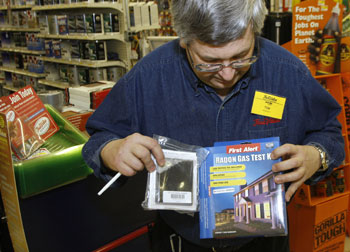 Tom Marsch, owner of De Pere True Value Hardware, demonstrates the use of a Radon Gas Test Kit. The kit helps detect radon, which can lead to lung cancer. (Rick Evans | For The Compass)

While presenting a small risk, environmental contamination still causes cancer. As Pagel noted, even though the estimated percentage of cancers related to environmental carcinogens is very small, “it’s still out there and who cares if it’s only a 4 percent chance? You don’t even want that.”

Environmental factors come into play in the world of cancer risk. If you know about the risks, you can also do something to prevent your exposure.

Radon
Radon is a colorless, odorless gas that occurs when uranium in bedrock underground breaks down and releases radium into the air as radon. The U.S. Environmental Protection Agency estimates that 21,000 U.S. lung cancer deaths are caused each year by radon and warns against breathing air that has more than 4 pCi/L (pico-Curies per liter, a form of measuring radiation). It is the second leading cause of lung cancer, after smoking.

Radon seeps through the ground and concentrates in areas like basements of homes. It is estimated that 5-10 percent of Wisconsin homes have unsafe levels of radon. The EPA has mapped out the state of Wisconsin according to increased levels of radon. Areas with more than 20 percent of the homes having more than 4 pCi/L are considered at risk. Map: http://dhs.wisconsin.gov/dph_beh/RadonProt/Radon/FinalEstPercentRadon.htm.

The highest concentrations in northeast Wisconsin occur along the western shore of Lake Winnebago and in Kewaunee County. Elevated levels were also found all around Lake Winnebago and the Fox River, and much of the lower part of the Bay of Green Bay. There is also increased radon in the Wolf River Basin.

The EPA estimates a one percent risk of developing cancer from breathing air containing more than 4 pCi/L. In 2005, the U.S. Surgeon General, Dr. Richard Carmona, issued a health advisory warning about the risk of radon above this level in homes.

Simple radon test kits can be purchased at hardware stores. If elevated levels of radon are found, radon abatement systems, including capping the sump pit, can be installed.

Next: What’s in the water?