A few weeks later, on July 24, the little boy, who had just caught his first fish that day, started complaining of stomach pains.

Cole was up most of the night off and on in pain. His stomach appeared enlarged and rock hard by Friday so they headed to the emergency room, thinking it could be his appendix. Cole was checked into the hospital and the doctors ran tests. 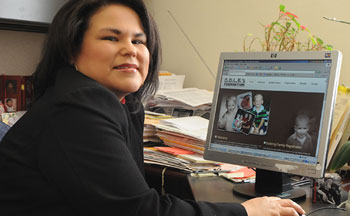 By 5:30 a.m. Saturday morning, July 26, the doctors thought it was cancer and transferred him by ambulance to Children’s Hospital of Wisconsin at St. Joseph’s Hospital in Marshfield. There they confirmed his parents’ worst fears: It was a very rare cancer called “endrenocortical carcinoma.”

Cole had a tumor the size of a man’s fist and it had overtaken his left kidney, penetrated his spleen, was moving into his liver, and traces were found in his lungs. It was also wrapped around his aorta and his spine.

This little boy, who one month earlier was fine, was now fighting for his life.

July 26 was also the day that Ruotsala began to write to friends and family, keeping them updated via e-mail and

asking them for prayers for their Cole. At only 23 years of age himself, cancer wasn’t even something he had considered.

Soon Ruotsala discovered CaringBridge (see www.caringbridge.org) where he learned about the free personalized Web sites that can be created to support and connect loved ones during critical illness, treatment and recovery.

The family’s odyssey to find a cure for Cole would ultimately lead them to Children’s Hospital of Wisconsin in Milwaukee – where on Sept. 19, 2008, only two months after a diagnosis, Cole would die in his parents’ arms.

But during those eight weeks the story of Cole’s fight to live was forwarded around the world. There were nearly a million hits on Cole’s CaringBridge Web site, including that of Laurie Martinez, an immigration counselor with Catholic Charities in Green Bay.

A friend had forwarded an e-mail about Cole and she decided to open it. “So I went to the Web site and I started reading it and there’s something that just hit me,” Martinez said of that moment that would change her life. She found herself logging onto the CaringBridge site to follow Cole’s progress and, she clearly remembers, “He wasn’t getting any better.”

A surgery was scheduled for Aug. 22 and Ruotsala had asked through the CaringBridge, “Can somebody get a prayer chain going?”

And indeed one was started online with the help of someone who was also keeping up with Cole’s story.

And so Martinez signed up for the online prayer chain, taking 4 to 4:15 p.m. that day of surgery. “I knew I could be at home and pray,” she said. With her were her two children, Larissa, 12, and Aleksander, 4. “Do you want to pray for this little boy?” she remembers asking them. “So we went downstairs and got the rosary.”

Martinez gets emotional talking about that late afternoon in August. “It was really neat that the three of us got together and prayed,” she said. The memory of the feeling of her young Aleksander snuggling up against her brings her to tears. “It was nice because he sat right by me … He tried to say the words.”

Aug. 24 was her birthday and her only wish was that Cole “pull out of this,” she said. “I was a mom, that’s why it struck me so hard,” she said.

The prayer chain continued and every evening from 10 to 10:15 p.m. Martinez was signed up to pray. She had also shared Cole’s story with co-workers at the diocesan offices. “My department would ask, ‘Is there anything new with Cole?'” she said. She even spoke with Bishop David Ricken, who offered an intention for Cole at Mass one morning.

The opening of this unsolicited e-mail had changed something for Martinez and she was particularly moved by what Ruotsala had said in one of his messages: “Go and hug your child.”

“I thought to myself, how is a 23-year-old guy teaching me a lesson?” remembered Martinez.

“How easy is it for me to get home and want my private time?” she pondered while speaking of the experience of praying for Cole, later adding, “How easy is it for us to go day by day and not give a second thought about our life … you’re so busy.”

Cole’s story has had a profound effect on how she views life. “I don’t know why, this little boy entered my life,” she said. “It’s hard to explain.”

“In the end he didn’t (make it),” said Martinez, “but maybe the miracle is that he brought so many people together in prayer.”

So just six months after Cole’s death, Martinez is now a member of C.O.L.E.’s Foundation (www.colesfoundation.com) established by Ruotsala as a legacy to his son. She adopted a child to support in prayer and is assisting with a newsletter for the foundation.

The initials of C.O.L.E.’s Foundation are a constant reminder of Cole’s legacy and stand for “Caring Openly, Loving Eternally.” The foundation’s mission is threefold: to create public awareness regarding children with cancer; to provide outreach, support and encouragement to their families; and to advocate for research to find a cure.

“This is like a whole new world for me,” said Martinez of childhood cancer.

Since his son’s death Ruotsala has been on a quest to find meaning in the loss of his son. “I tell people this, nothing will justify Cole’s death,” he said, but C.O.L.E.’s Foundation “certainly makes it much more bearable.”

He’s haunted by what his son went through as all hope faded. “As a parent, when your child comes to you with whatever injury … nine times out of 10 all they need is a hug and a kiss,” said Ruotsala. Pain killers didn’t help Cole as the end neared and as he rolled from side to side in his bed, he looked up at his father and said, “Daddy, help me.”

“I went to church every Sunday,” said Ruotsala, but the faith life he lives out today, he said, was born in Cole’s suffering. As he watched his son, it was the story of Christ’s suffering and dying on the cross and his own Father’s inability to stop it that got him through, he said.

Ruotsala’s family in Ironwood, Mich., owns a commercial concrete business but in the six months since Cole’s death he hasn’t worked there. Instead, he and his wife and children (their third child, Whitney Mae, was born Oct. 27) are getting by on $300 a week that comes from the family business which is allowing him to focus full-time attention on C.O.L.E.’s Foundation.

And he’s excited about the results so far. Since its founding just months ago, 800 families from all over the world have registered for support through C.O.L.E.’s Foundation. A book he wrote just days after Cole’s death will be published in March and Ruotsala is pleased with the success he’s having with a program he’s calling “Kids Unite to Fight” through which a high school helps a child with cancer.

Each day 46 children are diagnosed with cancer in America, said Ruotsala. He enjoys telling the good news of how many people simply care about others – even those they have never met. “We can actually make a difference in someone’s life,” he said.