GREEN BAY — Twenty-five years ago, Leo Frigo put his faith into action by starting Paul’s Pantry to help feed the poor. At first, supermarkets and restaurants frowned on donating excess or outdated food to the pantry, so Frigo would rummage through grocery store dumpsters to find edible food.

Within one year, the retired president of Frigo Cheese had convinced associates in the Wisconsin Legislature to pass legislation protecting businesses that donate food (and charitable organizations that hand out food) from civil liability. Statute 895.51 cleared the way for large donations to Paul’s Pantry and resulted in a successful program that helps thousands of Brown County residents each year.

Among those who will be in attendance is Fran Frigo, Leo’s widow. They were married for 42 years. She looks forward to celebrating the program’s success and the service her late husband gave to the community. Leo Frigo died Feb. 13, 2001, in an automobile accident while he was delivering food to a shut-in in Suamico. 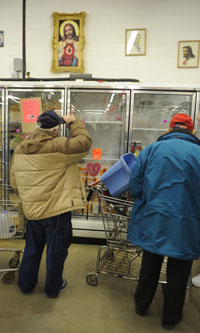 “Leo was inspired by his father, Pasquale, who started Frigo Cheese in this country,” said Fran. At the time, Frigo Cheese Company’s main office was located in Iron Mountain, Mich., close to railroad tracks where men hitching rides on trains would congregate.

“(Leo’s) father would make a big pot of soup for himself and his employees and he would feed all these fellows, too,” said Fran. “Leo always kind of liked that idea.”

Compassion for the poor guided Frigo’s life, said his wife. “The first year we were married, Leo told me he would like to retire in his 50s and do apostolic work.” True to his word, after retiring as president of Frigo Cheese in 1983, Leo made charitable work his new full-time job.

One of Frigo’s volunteer duties was to take released prisoners to job interviews. “They were living at this halfway house that was owned by the St. Vincent de Paul District Council and Leo was a Vincentian” said Fran. The halfway house manager, Arlene Conant, told Frigo that parolees with no money would steal for food and end up back in jail. He believed a food pantry would resolve this problem.

After a visit to St. Joseph Food Pantry in Appleton, Frigo decided a similar operation was needed in Green Bay.

“He went to the (SVDP) district council president and asked him for some space in the thrift store to set up a food pantry. Then he had to get the food,” said Fran. “So he started going to grocery stores.”

Dressed in a business suit, Frigo would visit store managers to ask for overstocked items or outdated food. “Most of them turned him down to begin with,” said Fran. “Craig Beyl, who was manager of Cub Foods West, was the first one to give him food and Leo no longer had to go into dumpsters.”

“When it opened, it was a very small place and there wasn’t a lot of food to distribute,” said Fran. “But there was a wonderful feeling about this. It grew very quickly from there. Finally they built a new building and Leo started a campaign for donors” to help fund the project.

“And they came,” said Fran. “They really flocked to it. There are some of those donors to this day giving nice donations. Leo told me that the basis of their donor campaign was people who gave $25, because there were just hundreds and hundreds who gave $25.” 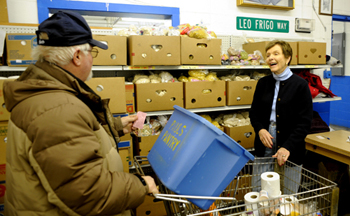 Denny Knutson of Green Bay shops for groceries at Paul’s Pantry while volunteer Tita Plouff prepares to assist him. Knutson has been visiting the pantry since losing his job as a nurse. (Sam Lucero photo)

Located on Green Bay’s north side, within view of the Tower Drive Bridge that now bears Frigo’s name, Paul’s Pantry is a model of efficiency. In fact, it is a model for charitable groups nationwide looking to start similar operations.

“We’ve had people from New York, Florida and California come take a look at the operation,” said Craig Robbins, director of Paul’s Pantry and member of St. Mary of the Angels Parish in Green Bay.

“One of the things that holds back other communities (from starting similar programs), is they are not willing to allow the people receiving the food to volunteer. There are not enough people available in the community… who can come in and help,” he said. “That’s one of the things Leo said right off the bat. He went outside and said, “Look, if we want it to open today, we need your help. From that point on, people jumped in and helped.”

In its 25 years of existence, volunteers have logged in 2.1 million hours of service, said Robbins.

Other numbers are noteworthy:

While the main goal of Paul’s Pantry is to provide food to people in need, it also strives to respect the human dignity of those who seek help. This is accomplished in the way food is distributed.

“We are set up like a grocery store,” said Robbins. “We felt that it was more dignified, rather than getting a box full of food that you may or may not like. This way they can choose to take or not to take.  It really does provide the person with more dignity, to go through the pantry for their own food, just like at grocery store.”

Paul’s Pantry is open five days a week. Doors open for visitors at 10:30 a.m. and first-time visitors go through an interview process. They are asked to fill out an application that includes income, household size and address. “That process is repeated every six months,” said Robbins.

“Once they are registered, they receive a pantry card and they present it with their picture ID,” he continued. Families of up to three people can visit the pantry once per week; families between four and six can visit twice a week. Families with seven or more members can visit three times a week.

After the shelves are stocked and coolers loaded with food, shoppers take turns in line entering the pantry with a shopping cart. Shelves and coolers overflow with a variety of goods donated by area stores or purchased with funds donated to the pantry.

Among the visitors to Paul’s Pantry last week was Denny Knutson, 55, an unemployed nurse who has been making visits to the pantry for two months.

“I’ve been a nurse for 35 years,” said Knutson, while loading groceries in his shopping cart at Paul’s Pantry. “I never thought I would see this day. It’s sad, but I’m glad there are people to help us.”

Knutson said he hasn’t been able to find employment. “I’m near retirement age. Being older, it’s tough,” he said. “I have donated in the past to different charities and now I get to be the recipient.”

Robbins said Knutson’s story is becoming more common as the economy slumps and people lose jobs. “In the past year, we saw an increase in the number of visits that people made to the pantry,” he said.

“Our registration numbers have been holding steady, around 4,300 families,” said Robbins. “What we’re seeing though, instead of coming once a month, they’re having to come two, three times a month, some four times a month. That’s where the big increase is coming – in the frequency that’s needed.”

For example, last December the pantry averaged 171 visitors a day, up from 149 the previous year.

Even with the increased numbers, said Robbins, “We never worry about not having enough food.”

“That part is really the miracle of Paul’s Pantry,” he explained. “It seems as though, the busier we get, the more food we get. The two seem to climb together. We really see God’s hand in that.”

Robbins explained that the pantry is like the miracle of the loaves and fishes in action.

“One thing we believe is that we are serving Christ in the person of the poor,” he explained. “Since God is the giver of all things — and in this case, he is also the receiver — why should we worry about not having enough to give him?”

The support Paul’s Pantry has received from the community also gives Robbins hope that the hungry will continue to be fed.

“Our community here in Brown County is probably the most generous in the entire United States,” he said. “If you look at Green Bay, we’re not a large city, but for our community to support one of the largest food pantries in the U.S. says a lot about the people who live here and their generosity.”

Fran Frigo believes God inspired her husband to begin Paul’s Pantry and the Holy Spirit continues to guide the operation.

“I think God was there all of that time. Leo also spent a lot of time on his knees praying (for the pantry’s success), as well as many other good people,” she said. “I give credit to wonderful volunteers who have continued all of these many years.”