The halls were alive with the sound of nuns

The Mass and the choral performance were part of an afternoon of events hosted by the Franciscan sisters. The day began with a tour and included a question-and-answer session and dinner. The high school performers, many of whom are portraying Austrian nuns in the show, arrived at the Bay Settlement motherhouse curious and excited to learn about life in the convent. 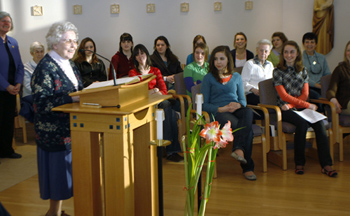 Franciscan Sr. Bridget Stumpf relates stories of being a sister to visiting girls from Notre Dame Academy, who will portray nuns in a school production of “The Sound of Music.” The Notre Dame students met with the Franciscan Sisters at their motherhouse near Bay Settlement Jan. 31, They also attended Mass and had dinner with the sisters. (Rick Evans photo)

“We’re here to watch and observe the life of nuns,” said Shawnda Warpinski, a sophomore at NDA and member of the sisters’ chorus. “We talk about the life of a nun, and what life was like in the 1930s. Some, here, lived during that time and we can get a feel for it.”

“I’m really grateful for this,” said Maggie Ball, a senior at NDA, who is playing the lead role of Maria Von Trapp. “I think we all had a lot of questions about our roles going into this. It’s really nice to know what it takes to be a nun, and learning what a postulant is.”

“The Sound of Music,” one of the most memorable musicals of the Rogers and Hammerstein era, is the story of Maria, a young postulant in an Austrian abbey in the late 1930s. Not fitting in with the community there, Maria is sent out by her mother superior to serve as governess to a widower’s seven children.

The widower is a retired naval captain. Maria’s bright and cheery nature lightens up the gloomy lives of the household, and soon Maria discovers her love for the family and the captain. “Discernment” and “obedience,” two themes prevalent in the show, were easy to be identified with among the Franciscan sisters.

“We see the struggle of Maria in leaving community life, and the role of mother superior in making those decisions,” said Sr. Laura Zelten.
Sr. Laura, a Bay Settlement sister, is also the director of campus ministry at Notre Dame Academy. She was instrumental in bringing the musical performers to the convent. It was her hope that this would give the students an opportunity to understand their roles as sisters in the show.

“This is really a dream come true,” she said. “I feel like my two loves are coming together. The first being the community I live in, and the other is my ministry at Notre Dame Academy.”

During the Q-and-A session, Sr. Laura explained that postulants are candidates to the religious life, who are asking the question of what is God calling them to do. After being granted entrance into the community, they begin classes. The life in community enhances the postulant, either to a permanent life in community as a sister or discerning a life after community. Regardless, they are better for it.

Several of the sisters shared their calls to the religious life with the students. Sr. Carlotta Ullmer, who recently celebrated her 70th year as a sister, described how learning about the life of St. Francis drew her to the order as a young woman. She described the love that St. Francis had of Jesus Christ, and how that inspired him, as well as her, to remove from their lives the material pleasures that competed for that love.

“There’s a call, many of us struggle with it,” Sr. Laura added. “Prayer and spirituality class gave us that time to think. We could look at the different lifestyles of religious life, marriage, and single life. It (discernment) needs time. It doesn’t happen overnight.”

A major theme of discussion that afternoon was comparing the life of a sister today to that of decades ago. One of the obvious areas of change was the transition of dress from the traditional full habit of then to the lay clothes of today. The roles of ministry for a sister are different as well.

A sister’s work was typically in nursing, education or housekeeping, and they had little say on where they were placed. Now, they collaborate over where they are needed, and where their strengths could best serve others. In the time of Maria’s discernment, an aspirant could enter right after graduating from the eighth grade. In recent years, the age limit of entrance progressed to 18. Nearly all of the sisters present for the talk entered the convent in their teenage years.

“A lot has changed,” Warpinski said. “We looked at a display they have, and saw how their appearances changed over time. Today the look is modern. A lot of the sisters want to stay up with the times.”

The day was helpful to Mallory Maedke, an NDA junior. Impressed by the sisters she met, she hopes to develop her role as Sr. Margaretta. Maedke has thought about a vocation to religious life, but at this time is planning on a career in acting. Likewise, Ball, through prayer and self-knowledge, doubts she’s being called, but believes it should be a part of every woman’s life to know about religious life, and consider it.

“I have so much respect for them and their life as sisters,” Ball said. “This will hopefully make my role as a sister more realistic, and become more of a character.”

“The best part of the show for me is being a nun,” said Warpinski. “We’re in full-out habits, and really get a taste for it!”