Who is the face of cancer?

Thanks to the care she received from the St. Vincent Regional Cancer Center in Green Bay and its physician partners, Dorleen was eager to talk about the unforeseen year that at first shook her and her husband Len to their cores and today finds them with a life of unexpected richness.

She was an atypical person to receive the diagnosis of colorectal cancer. Active and attentive to good eating habits, Dorleen was only 47 when she went into the hospital in late 2006 for the colonoscopy that would confirm the diagnosis.

A former smoker and at one time overweight, she began focusing on her now ingrained healthy lifestyle when she met the love of her life, Len Delveaux, her husband of 11 years. 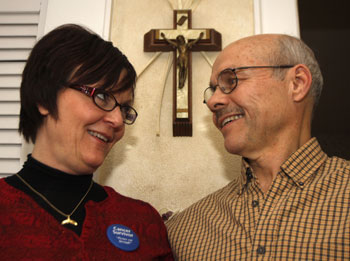 Dorleen and Len Delveaux, members of St. Agnes Parish in Green Bay, are pictured in their home. Dorleen began treatment for colon cancer after undergoing a colonoscopy in 2006. Her last chemotherapy treatment was in September 2007. (Rick Evans | For The Compass)

It was in early 2006 when Dorleen saw blood in her stool. She chalked it up to hemorrhoids. “It was probably going on for about six months,” she said. At the time, she didn’t suspect anything serious. But in hindsight she remembers being tired and having unusual on and off lower back pain.

She even went to the doctor during the bleeding episodes, but didn’t mention them. “I was too afraid,” she said. Plus, “Where it’s located it’s an embarrassing thing,” she remembered thinking.

At one point she considered colorectal cancer as a possibility and did her own research. “I really didn’t have those symptoms that they said online,” she said.

So Dorleen did a natural colon cleansing at home and started taking dietary supplements to improve her intestinal health. The bleeding halted.

But something changed in late summer 2006.

“We were camping in August and my bowels just changed dramatically,” she said. The bleeding started again but added to it was the discomfort and embarrassment of the marked change in her digestive system. “I was very, very anxious … my heart would always be racing,” she added.

The school year began and she returned to work at Nicolet School in Green Bay, where she is a school cook. Another month went by before she finally said, “I can’t live like this. I called the doctor. I think I even got in that day,” she said.

It was the nurse practitioner who ordered the colonoscopy to be done at St. Mary’s Hospital Medical Center in Green Bay.
And as she came out of the anesthesia it became apparent that something was very wrong. Cancer was the likely culprit, but the doctor wouldn’t confirm the diagnosis until after tissue samples came back from pathology.

That was on a Friday.

The weekend was long. The Delveauxs poured over the Internet, looking for ways to prepare themselves for the new reality they anticipated. They heard the words on a Monday: “Stage three colorectal cancer.”

The couple found themselves united in their determination. “Let’s do what we need to do now,” remembered Dorleen.
“We never thought negative … I guess in my heart I knew I was going to be OK,” she said, emphasizing, “I was willing to do anything that it took at that time.”

They took the recommended advice to get a second opinion, which resulted in their meeting Dr. Peter Falk, who would do Dorleen’s surgery.

But first would came chemotherapy and radiation to shrink the growth that had been found. She continued to work through the course of treatment. She had a few tough days, but remembers thinking, “This is a breeze. What’s going on?”

It was February 2007 when Dr. Falk performed her surgery. She, her husband and Dr. Falk had prayed together as they made the initial decision about her surgery, Dorleen said.

They prayed together before the surgery as well.

“You felt at ease,” she said of that prayer. “God’s going to be watching over me while they do it.”

The surgery took six hours. “I woke up in so much pain,” she remembered.

Dorleen had 18 inches of her colon removed as well as lymph nodes. She would live with an ileostomy to empty her colon for six months. “It was in my lymph nodes,” she said of the cancer.

Surgery was followed by a round of preventative chemotherapy. It was not required, but highly suggested. She recalled the doctor telling her, “‘If you were my wife, I would have you do the preventative.'”

“I would advise anybody to do it,” she said. “The chance of it coming back is 25 percent compared to 40 percent (without preventative chemotherapy).”

The preventative round of chemotherapy was tougher than what she went through prior to surgery. It left her with some neuropathy in her feet and she still has a sensitivity in her fingertips that during treatment required her to wear mittens when she went into the refrigerator and freezer. It felt like she was touching an electric fence, said Dorleen.

During treatment Len got her out to exercise as recommended, though muscle aches were part of everyday life. So were her cravings for “junk food.” She even sent her husband out in search of her favorite cheesecake.

Yet her throat was also afflicted with a burning sensation. To get the proper nutrition Dorleen and Len started using a juicer for fruits and vegetables. “We started to eat really healthy and it paid off,” she said.

She took treatments every other week for six months with the week of treatment taking its toll. “Then you feel really good the next week and then you have to go back,” she said.

“I don’t want to go back,” she remembered thinking. “I would just cry.”

But Dorleen was never at treatment alone. When her husband couldn’t be there, a friend would be by her side. To those who have friends and family going through cancer, her recommendation is simple: “Be there.”

Her co-workers “were absolutely wonderful,” chipping in on a spa robe for her to use during treatments. And she used a course she had taken through the Green Bay Public Schools prior to her cancer, titled “Investment in Excellence,” as an inspiration to be positive during treatment. She took the course again after her treatment was completed.

She explains the Investment in Excellence motto this way: “You just ask for what you want instead of what you don’t … choose your attitude.”

“I am a cancer survivor,” is what Dorleen wanted.

Her last chemotherapy treatment came on Sept. 17, 2007, one day after her 48th birthday. She calls it “the best birthday present ever.”

All of her PET scans – the screenings done to determine the presence of cancer – have come back negative. And she has graduated from check-ups every three months to every six months.

“It’s just amazing,” Dorleen said, tearing up as she came to the end of her story. “They said it was probably there for five years.”
Many prayers were said by the Delveauxs, including during a visit to The Chapel, the Shrine of Our Lady of Good Help in New Franken. There the couple lit candles together. “There’s somebody that’s higher than you,” said Dorleen. “You’ve got to have the faith that God is going to get you through it.”

Soon after Dorleen completed her treatments the couple again chose their attitude: They decided they wanted to give back.
That’s why they enthusiastically chose to talk about their journey to the other side of cancer.

They also want to help get the word out that colorectal cancer can afflict the lives of people under the age of 50.
This past Christmas season, Dorleen decided she needed to offer a personal sign of support to others going through treatment at the St. Vincent Regional Cancer Center.

Remembering well her desire for junk food she and Len purchased a dozen $10 McDonald’s gift cards. With a flourish of festive wrapping she added a chocolate bar to each gift with this heart-felt message: