A familiar face in Rome

While editing photos of Archbishop Timothy Dolan, taken during my time at the Milwaukee Catholic Herald, I came across one photo featuring a familiar face for folks in Green Bay. (See below)

While traveling with the archbishop to Rome in 2003, for the presentation of his pallium by Pope John Paul II, I snapped a photo of the archbishop walking just outside St. Peter’s Square with a TV crew from Milwaukee. The news anchor was  none other than Tammy Elliott, now at Channel 5 WFRV. Tammy and her cameraman, Bob, made the trip to Rome for the archbishop’s pallium presentation.

Fr. Tom Brundage, at the time associate publisher of the Catholic Herald, and I had a chance to visit with Tammy and Bob atop the Vatican colonnade while waiting for the pallium ceremony to begin. It was an exciting time looking down upon the crowd of people in St. Peter’s Square.

The scene will repeat itself next June 29, when Archbishop Dolan will receive a new pallium by Pope Benedict XVI. Only archbishops receive the pallium, a liturgical vestment worn over the shoulders.

For the record, the photos I edited are for a television broadcast produced by the archdiocese called "Living Our Faith." The still photos will be displayed at the conclusion of the program, the final one of Archbishop Dolan’s time in Milwaukee. 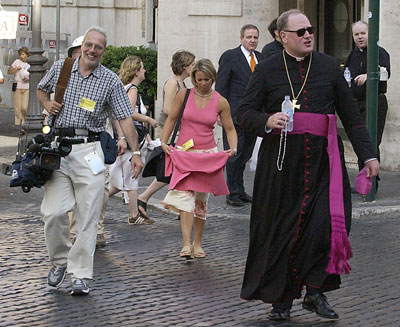