A life interrupted, yet grateful to God

But their life was interrupted, tragically, five days after Gen retired. 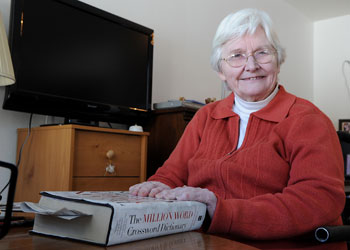 One of Gen’s duties was decorating the church. On June 5, 1987, she and Mary Dietrich arrived at St. Mary Church to remove the white cloth that draped the church’s crucifix during the Easter season. It’s something she’d done on numerous occasions.
“I went up the ladder and I had to go up to the very top,” said Gen. “I pulled on it and it would not come off. That was a surprise, because I always just took a hold of it and it came off.”

Fr. John Neuser, pastor at the time, was at the church and saw Gen struggling to remove the cloth.

“Fr. John was in the corner and said, ‘Gen, leave it go. I’ll get it.’ I said, ‘Oh, I’ll give it one more tug,'” she recalled. “I gave it a tug and the cross went right down the wall. It didn’t fall forward, it just slid down the wall. I was up on the very top of the ladder, so I went down. I don’t recall anything except pulling and I woke up in the hospital.”

Gen fell about 18 feet to the ground, severing her spinal cord and leaving her paralyzed from the waist down. She was taken by ambulance to St. Vincent Hospital in Green Bay. Coincidentally, her husband was returning to Brillion from St. Vincent Hospital, where his father had just been released.

“He walked into the emergency room and they said, ‘She has a 50/50 chance (of survival),'” said Gen. “He was very shocked that I was in that condition. That evening Fr. William Stengel, who was hospital chaplain, and Fr. Neuser gave me the anointing of the sick.”

Two days later, as Gen regained consciousness, she was told she was paralyzed.

“I said, ‘God has other plans for me,'” she said. “Somehow, the clay thing came to mind: He’s going to mold me in a different way. I guess I shed a few tears, but I really felt God had something else in mind for me.”

Her positive attitude helped in the months of rehabilitation that lay ahead.

Gen remained in intensive care from June 5 to June 20. She then had a tube inserted into her lung to drain fluid buildup. By June 25, she was in a wheelchair. The next two months were spent undergoing physical and occupational therapy. During that time, Robert remodeled their ranch home, making it wheelchair accessible.

Gen returned home on Aug. 20 and began a new chapter in her life. Restricted to a wheelchair, she found ways to stay active at church. “Robert had somebody build a ramp into the school so I could help out with religious education or attend meetings,” said Gen. “Then we built one into the church.”

She returned to teaching religious education, first to high school and junior high students, then to third graders. Her home was one block from church. Instead of classes at church, the students were escorted to her house.

“Someone would walk them over. It was wonderful,” said Gen. “We sat around the dining room table and they loved it.”
Gen also handled the scheduling for church ministers. “I did it from the time I got hurt,” she said. “Those are the two things I felt good about, scheduling and teaching. I felt like I was still involved.”

Gen’s life was again interrupted when her husband came down with a Corticobasal Syndrome, which is similar to Lou Gehrig’s Disease. “He started losing strength in his arms,” she said. “So instead of him taking care of me, I was taking care of him.” Home care nurses assisted the couple. When Robert’s condition worsened, he went to a nursing home, where he remained until his death on July 4, 2002.

After Robert’s death, Gen managed to live alone at home. “I wasn’t as afraid to be by myself because I was doing everything by myself” for several years, she said.

Her independence ended and life was again interrupted on Feb. 1, 2008. Gen had been suffering from painful ulcerated pressure sores. The bed sores were severe enough to send her to St. Vincent Hospital. She spent 10 days recovering, but the sores needed time to heal. Gen was transferred to Parkview Manor, a nursing home in Green Bay. She cried at first, but submitted her fears to God.

“I thought I’d heal in a month or two and it took eight months,” she said. “It turned out to be a real good experience.”
Last November, Gen returned to Brillion; but not to her home. She now lives at Garrow Villa, an assisted living facility. “I’m going to stay here until I am totally independent again.” she said. “I’m not at that point yet.”

Throughout life’s interruptions, Gen said her strength to continue comes from her faith.

Each morning she turns on her television to watch the recitation of the rosary and celebration of Mass on EWTN. “I put my faith (in God) right from the beginning,” she said. “Whatever happens today, God is with me.”

She said God has been with her through years of pain and discomfort. Rather than complain, she has found a way to offer her pain up to God for the sins of the world. This practice is known as redemptive suffering.

“I definitely (offered up prayers) in the nursing home because I was always confined to the bed,” she said. “What I said was the prayer for the sake of (Christ’s) sorrowful passion, ‘I offer my pain for people who are having abortions, for our country and my family.’ And I still do that now, especially for our country and abortions. Otherwise, what good is suffering if you don’t offer it for something?”

Gen is working with a neurologist to help ease her pain. “My pain is pretty bad now and she thinks there’s a reason she can find that might relieve it,” she said. “I’m going to take an MRI in a couple of weeks. In the meantime, I’m offering it up.”

As she approaches the 22nd anniversary of her paralysis, Gen remains in high spirits, finding ways to live out her faith through prayer and by serving as an example to others. She’s also putting the finishing touches on her journal.

“I would say I’ve got 30 pages typed,” she said. While she’s chosen the title “Life Interrupted,” Bishop Robert Morneau, a friend since 1980, has a better title: “A Red Badge of Courage,” or, quoting Mary, “Do Whatever He Tells You!”

“She is living out her baptismal call of participating in the life, suffering, death and resurrection of the Lord,” said Bishop Morneau.