The Vanden Avonds are dairy farmers and Francis has been a member of the diocesan Rural Life Committee for 16 years. “I’ve been to about the last 20 rural life Masses,” said Vanden Avond, who owns about 170 cows on his 180-acre dairy farm in the Village of Bellevue. 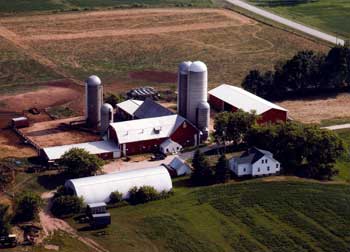 This year’s Mass at Prince of Peace Church will be especially meaningful for Vanden Avond. Prince of Peace, which was dedicated by Bishop Emeritus Robert Banks last August, is located on the 19. 2 acres of land he sold to the diocese in 2004.

Seeing the new church – a merging of Holy Trinity in Pine Grove and Holy Martyrs of Gorcum in Green Bay – built and come to life with worship and social events makes Vanden Avond proud of his decision to sell the land to the diocese. “It’s the best crop we ever grew on that site,” he said, smiling.

According to Vanden Avond, the farmland has been in his family since 1871. He bought the farm, originally 300 acres, from his father. Now his son Carl operates the dairy farm.

According to Vanden Avond, the rural life Mass gives farmers an opportunity to offer thanks to God for past blessings. It also is a chance to ask for God’s divine guidance in difficult times ahead.

“Right now, (Wisconsin dairy farmers) are receiving about one-half of what we got one year ago for milk,” he said, noting that farm families are veterans at making adjustments. “It’s stressful, but hopefully things will improve.”

Vanden Avond said that each spring is a time of hope for farmers.

“We’re all full of hope as the grass gets green,” he said. “We’re asking the Lord’s blessings on our work and on our crops for the year.”