In sickness and in health

The cancer journey is an experience shared by the spouse and can test the strength of a marriage, said Gary. 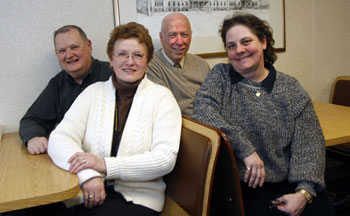 Gary Mach, left, and Tony Kuick say support from their spouses, Eileen and Debbie, have made the cancer battle less difficult. (Rick Evans | For The Compass)

“The wedding vows – for better or for worse – well cancer, that’s the worse,” he said. “I think we had a good marriage, and going through it probably made it a better marriage.”

Gary had surgery followed by six chemotherapy treatments during his first bout with cancer. He immediately became ill from the chemo.

“It was like they took you to the stairs and pushed you down,” he said.

“It was so tough. He was so sick,” said Eileen. “I was trying to get him to eat regularly. He was nauseated so he just wouldn’t want to eat or drink. He had a bout with dehydration.”

“It felt like I had just eaten Thanksgiving dinner and someone tells you to eat,” said Gary. “And I was losing weight. I lost 30 to 40 pounds.”

Tony’s illness initially required 35 radiation and six chemo treatments. The cancer spread, leading to the current round of treatment.

Both the Kuicks and Machs had previously dealt with cancer in their families. Eileen’s father and sister died from the disease and another sister is currently battling the illness. Both Tony and Debbie lost their fathers to cancer.

“My mom has been giving me hints about what to watch for,” said Debbie. “I have to do some things differently. You have to wash his clothes separately. He has to be careful around the grandchildren, because his immune system is weak.”

The Kuicks will be married 34 years in June, while the Machs celebrated 40 years of marriage this past year. The men credit their wives for their tolerance and support during such a difficult time.

“What they have to go through is not easy and there is no complaining,” said Tony. “‘Why are you doing this to me?’ ‘It’s a lot of extra work.’ You never hear any of that. They are always by your side, always checking on you.”

Tony and Debbie have three grown children and two granddaughters. Their youngest daughter, Melissa, has special needs, which adds to the difficulty of dealing with the illness, said Tony.

“She blames herself for anything that goes wrong, so we have to be careful,” he said. “She would blame herself for the cancer.”

“Our kids have been really good,” said Debbie. “Olivia (New Berlin) calls every day, and Greg (Green Bay) has been here for us. The support of friends really helps. His golfing buddies call from Florida all the time.”

“I have very good friends,” said Tony. “People in the office have been very helpful. They have stopped at the house with meals and have mowed the lawn. It’s hard to accept, but it’s appreciated.”

Both men said the mental challenges are often as difficult as the physical hardships of cancer treatment. They praise the kindness of the staff at Green Bay Oncology for making it more bearable, but knowing what awaits you in treatment is tough, said Gary.

“I had treatment every three weeks,” he said. “You know what is coming. That was hard psychologically, but you can’t feel sorry for yourself. That’s the worst thing you can do.”

“You get frustrated,” said Tony, “The time it takes to do anything is frustrating. You don’t have any energy. One of the things you get with cancer is fatigue. Then you get tired of being tired.”

“I try to keep busy, but I don’t have the energy I used to have,” said Gary. “I used to do everything, but now I hire people and I assist. I work part-time at Cellcom, volunteer at the diocese, volunteer at the National Railroad Museum and serve on the board for the Chicago and North Western Historical Society. I try to keep active.”

Cancer is never far from his mind. Gary continues to get checkups every three months and has aftereffects from surgery and treatments. For example, he cannot lift more than 20 pounds with his right arm, and is susceptible to infections in his right arm and hand.

Tony describes his current treatment as “so far, so good.” He has developed a rash, which indicates that it is working. He was initially given a prognosis of 12 to 13 months to live.

“I got angry,” said Debbie. “Tony doesn’t smoke and hardly ever drinks. Why him? I got angry about that.”

Both women said their knowledge of medicine is now extensive due to their husband’s illnesses.

“We know a lot more about medicine than we should have to know,” said Eileen.

Humor is helpful in dealing with the illness, said Tony.

“My granddaughter laughs at my bald head,” he said, “and I’m fine with that.”

“When we were told he had up to 12 months to live, that’s shocking,” said Debbie. “Then his oldest brother called and said (jokingly), ‘That means you won’t be here for Thanksgiving.’ He recently called to wish Tony a happy birthday ‘in case you’re not here for your birthday.'”

Gary said he reacted with anger when informed of Tony’s diagnosis. He and Eileen have shared their cancer experiences with the Kuicks as a means of support and assistance.

“She (Eileen) has gone through it, so it’s helpful to have her here (in the office) to push him to drink his water,” said Debbie. “I really appreciate that.”

She added that she anxiously awaits the days when her husband is out of the office.

“I’m looking forward to the weather getting warmer so he can go out golfing,” said Debbie. “I hope that time is coming soon.”