‘It takes a real man to be a father,’ says speaker

Deacon Burke-Sivers was one of three conference speakers at the day-long gathering. He was joined by Norbertine Fr. Alfred McBride of De Pere and Fr. Larry Richards, a priest of the Diocese of Erie, Pa. The event concluded with a Mass celebrated by Bishop David Ricken. 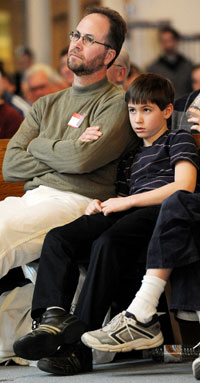 Al May of St. John the Baptist Parish in Marshfield attends the Esto Vir conference with his 12-year-old son Matthew. (Sam Lucero | The Compass)

During his talk, titled “In the Footsteps of St. Joseph: Living Each Day as a Man of God,” Deacon Burke-Sivers reminded conference attendees about their obligation to live up to their roles as Catholic husbands and fathers.

“The greatest gift I can ever give to my children is to love my wife as Christ loved the church, to give my life and die for her every single day of my life,” he said, adding that men need to let their children know two things.

The first thing is to let them know how much God loves them. This can’t be taught by giving them books to read; it must be taught by example, he said.

“They have learned to love Jesus from a book,” he said. “If we continue to teach our Catholic faith like a subject in school, just as an academic exercise, when they leave your house all they are going to remember is like, ‘There’s seven sacraments and Ten Commandments and stuff.’

“What they have to do through our example is to fall in love with Jesus. … As soon as they make that connection between their head and their heart, then we are going to see a revitalization of the Catholic Church that has never been seen before in history,” said the speaker.

“The second thing they need to understand is … that we would rather die than to see them participate in self-destructive activity,” Deacon Burke-Siver said. “We would gladly take their place if it meant that they would be safe and secure and healthy. They need to know that we love them more than they will ever know, but our love for them doesn’t even come close to the love that God has for them.”

He added that any man can be a dad, “but it takes a real man to be a father.” 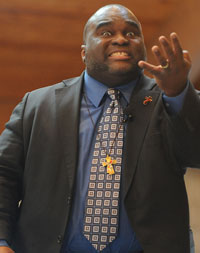 • Asking a priest or deacon to bless the family’s home computer. “There’s a book called the Book of Blessings. Man, you can bless fishing equipment in that book,” he said.

• Have a desk crucifix. “Right in front of the computer I see the cross of our Lord and savior Jesus Christ to remind me of what kind of man I’m supposed to be.”

• Place holy cards around your computer. “I have the Sacred Heart of Jesus, the Blessed Virgin Mary and St. Joseph by my computer,” said the speaker.

• Bookmark on a web browser www.savior.org. “You know what that site is?” he asked. “Perpetual eucharistic adoration live stream. As I’m working on my computer I’ve got the Blessed Sacrament on my computer staring right back at me.”

• Surround your computer with family pictures.

• Pray before surfing the web.

“Our Father, three Hail Marys, a Glory Be to the Father, then I log on,” he said.

“We’re in a spiritual battle for our lives as Catholic men and we already know that we are going to win, but we have to work hard to battle Satan and be counter-cultural; to be the men whom God calls us to be.”

In an interview following his presentation, Deacon Burke-Sivers was asked about the election of this country’s first black president.

“I think it’s a wonderful thing that we’ve reached a point in our country where we can elect a president not looking at color or race,” he said. “But the man definitely needs our prayers. Not just to get this country through the economic crisis, but especially that we pray that he changes his positions when it comes to issues of life.”

Deacon Burke-Sivers said that the right to life “is written into our Declaration of Independence. There’s nothing more fundamental. So we need to pray that he has a change of heart when it comes to issues of life, not to allow life issues to become politicized but to have the courage to really legislate the truth when it comes in the area of human life.”

Deacon Burke-Sivers, who hosts “Behold the Man,” a series on male spirituality televised on EWTN, said people at conferences ask him if he voted for Barack Obama.

As an African-American, he finds it troubling to see a disproportionate number of black women having abortions.

“Our women are about 13 percent of the population, but (account for) 35 percent of the abortions,” he said. “We’re killing ourselves through abortion and we need all of our (politicians) to recognize that.”

According to John Cavil, one of the Esto Vir organizers, this year’s conference attendance surpassed all previous ones.

“We’ve had our largest turnout, almost 650 guys, so it’s been an outstanding conference from an attendance standpoint, but certainly everyone we’ve talked to has been very impressed with the speakers, the energy and the Holy Spirit moving,” he said. “Wonderful things are happening in our diocese and it’s exciting to be part of it.”

The conference attracted men from throughout Wisconsin. Brothers Mike and Bill Soens of Kenosha County left their homes at 3:30 a.m. to arrive in time for the morning’s rosary recitation. “It definitely was worth the drive,” said Mike Soens of St. James Parish in Kenosha.

“They keep talking about us, about being sinners, and you need constant refreshment, you need to keep coming back and get spiritually renewed over and over,” he said. “This really fits in well with the Lent theme – to think about what we need to be doing as Catholic men, to refocus where God wants me to be.”

Bill Soens, a member of Holy Cross Parish in Bristol, has attended the past three Esto Vir conferences. He said he saw a flyer for the conference at St. Peter Church in Antioch, Ill., located a few miles southwest of Kenosha.

“I feel like men are being called to get up off their butts and be real men,” he said. “They’re showing us what men of Christ are supposed to be. To be here and praying and singing with 600 guys today, that’s powerful.”

Steven Windey, 17, a member of St. Mary Parish in De Pere, attended the gathering with his father. “I love it. It’s really helpful. It kind of stimulates me, gets me going, instead of just being the usual go with the flow kind of guy,” he said. “It kind of keeps me closer to God.”

Al May of St. John the Baptist Parish in Marshfield attended the conference with his 12-year-old son, Matthew. “I always try to do something during Lent to aid me to be a better father and a better husband and this conference has proven to be a very good way to do that,” he said.

During his homily, Bishop Ricken praised the men for seeking to become better husbands and fathers.

“Living the Christian life is not rocket science,” he said. “It’s about following Christ and dying to ourselves so that Christ can live more in our minds and in our hearts.”

Catholic men are called to marital chastity, Bishop Ricken told the men, “but you can’t do it on your own. You need the help of the Holy Spirit to live a virtuous life, because marital chastity does not mean just not being with other women, it means that you live your life in a consecrated way, making (your wife) the queen of your household and you are the king. That’s still a beautiful model.”

He gave them advice to help them on their journey.

“If you want to be a true husband, a true father, a true man, then spend time in prayer, contemplating the face of Christ,” he said.

“Once you surrender your life to Christ, once you get out of God’s way and let his will be done, you are far more useful than when you and I try to run the show,” added Bishop Ricken. “So I ask you to put on the clothing of virtue, put aside the old rags that are filthy, timeworn and certainly don’t get you into the kingdom of God. … Come dressed filled with a virtuous heart and place that here at the table of the king, in loving service and devotion.”

See slide show of additional photos at this link.