Students help fill backpacks with books for kids in crisis

St. Joseph sixth-grade literature and math teacher Jill Kiepert introduced the program to her students at the beginning of the year. “I knew I wanted to do a service project with my ‘lit’ class which probably involved books, but I didn’t know where to go from there,” recalled Kiepert. “I didn’t just want to collect books and donate them somewhere; I wanted to know where they were going to go.” 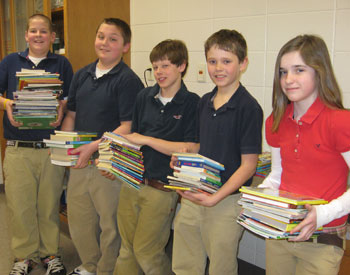 Sixth-graders in Jill Kiepert’s literature class hold books that were collected for “With Wings and a Halo.” Pictured from left are: Vinnie Oestreich, Tyler Murphy, Levi O’Brien, David Adair and Megan DuBois. (Amanda Lauer | For The Compass)

Kiepert said a friend introduced her to With Wings and a Halo. “Then it clicked that we can collect books for that.”

The backpacks are currently in nearly 5,000 vehicles in all 72 counties in Wisconsin. Within the first nine months of operation, 45,000 children’s books were distributed. There is a waiting list of 15,000 squad cars and emergency vehicles in Michigan, Illinois and Minnesota looking to be equipped with the back packs.

The book collection started on Feb. 9. “We’re up to about 400 at this point. We are collecting until March 20. The kids are more enthusiastic probably than I’ve seen them about anything we’ve done this year,” noted Kiepert. “Every day they come in and they don’t want to do the other curriculum stuff, they want to focus strictly on this and making phone calls to media, e-mailing media, making posters, interviewing for the school news, doing the newsletter. They’ve all had their tasks and they’ve all had to be a part of this.”

The students do a lot of work for this project outside the classroom as well, Kiepert said. One of the most enthusiastic volunteers has been 12-year-old Vinnie Oestreich. “Our teacher decided to get this book drive going because this is literature class and that kind of goes along with books,” said Oestreich. “We are getting books from all over – family, friends, our bookcases. We bring them here and we’re actually doing this school-wide. The books can be gently used or new.”

When asked if he was happy to be involved in the project, Oestreich didn’t hesitate with his response. “Yeah, it’s really cool.”
After seeing the Kimberly Area School District collect 1,200 books for their recent book drive, Kiepert and her class set that number as their goal. Donations from the community are welcome and may be dropped off at St. Joseph Middle School. On March 23, a police officer with the Appleton Police Department will talk to the students about the impact of their donation. A representative from With Wings and a Halo will pick up the books and talk to the class as well.

Anne Strauch, the Appleton Police Department Community Engagement Coordinator, has seen With Wings and a Halo – R.E.A.C.H. a Child in action. “They started out about a year ago in our area. We gave each of the officers a bag with books in it that they can carry in their car.”

She recalled feedback she received from an officer when the book bags were first placed in the police cars. “He said to me, ‘This is just fabulous. I had some kids that were all upset and I had to be interviewing mom and dad and we were able to give the kids a couple of books and it made all the difference in the demeanor in the situation, to be able to give them the books to settle them down.’ For some of these kids, they don’t get gifts like that. To be given a brand new book is just great.”

Strauch is heartened to see volunteerism from middle school students. “I think this is the right step for them. It’s getting them started with caring about their community. They’re starting at a young age and it’s got to have a good impact on them that hopefully this will be a lifelong ambition for them to be community-oriented like this. I think this is just awesome.”

She expressed hope that someday maybe some of the children receiving books will remember that action and want to repay that kindness as well.
This is a learning experience for Kiepert’s class but the students don’t see it that way. “They see it as hard work, but they see it as worthwhile hard work,” said Kiepert. “I’m hoping they learn that it’s important to help others and not always put themselves first.”