Becky and Adam Lange were married on Jan. 31 at St. Katharine Drexel Parish in Kaukauna. The two had met while attending UW-Stevens Point; she for education and he for natural resources and law enforcement. 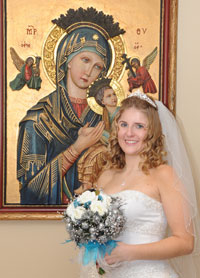 Becky Lange stands near an icon of Our Lady of Perpetual Help on the day of her wedding Jan. 31 at St. Katharine Drexel Church in Kaukauna. (Sam Lucero | The Compass)

And the wedding program declared it to be “No Tumor Talk Day.”

Not long before the wedding, Becky had been diagnosed with an acoustic neuroma.

“I had been having these night episodes,” she said, “I’d wake up freezing cold, not able to breathe and heart racing. It first happened last spring.”

After several tests, an MRI revealed a tumor, pushing on the cerebellum and the brain stem. While this type of neuroma is not usually malignant, its large size and position make it complex and life-threatening. (And it wasn’t causing symptoms; those were from asthma.)

“For a while we were worried that we’d have to postpone the wedding,” Becky said. However, after further tests at Froedtert Hospital in Milwaukee, “the doctor said to go on with our wedding plans and come back after the honeymoon.”

Becky is not new to the medical world. She was born, 23 years ago, with several birth defects, including craniosynistosis, or closed skull syndrome. She had two operations to open space for her brain to grow – one at two months of age, and a second five months later. The doctors took off her skull, turned it around and replaced it, also building an eye socket that she never had.

Normally, to do this, they break the skull bone and piece it back together – like particle board – letting the bone regrow. However, something else was wrong, which they only learned later.

Becky’s dura mater, one of three membranes encasing the brain and lining the skull bone, does not grow. If they had broken her skull, the bone would never have regrown. However, the doctor “had a feeling,” so he kept the bone intact and experimented and used a facial muscle to wrap Becky’s brain. That did grow. 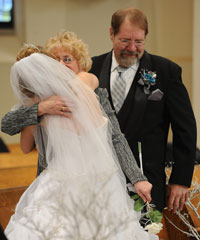 Things were OK for a time. Then, at age 4, Becky started having seizures. She had always had some, since birth, but things were worse. An MRI found a brain tumor.

“They said it was (then) inoperable, but not cancerous,” said Becky’s mother, Jeannie Hannemann. “They believe, now, that this is the same tumor.”

Today there is a surgical procedure. However, it’s only done at a few hospitals in the country; one is Froedtert in Milwaukee. The surgery is scheduled for March 25.

“With her complicated past history and bone thickening (from the first surgeries) and not growing right,” this is much more complicated surgery than normal,” said Jeannie. “The place of normal entry is where she has that sliced face muscle, pulling over it. There’s a risk already of face nerve damage.”

Additionally, there is a risk of deafness.

For Becky, though, the impending surgery didn’t overshadow her wedding day.

“For me, I could have thought it wasn’t even there,” she said, “I had no thoughts of it during the day. It was happy stuff. We could just enjoy the day.”

For her mother and father, Bruce, the day was largely happy, though both had tears in their eyes as their daughter and new son-in-law walked to the Mary statue on the side altar.

“The beauty for me,” said Jeannie, “was watching them taking these vows of sickness and health, and watching it be real, a witness to us about what love is really about.”

Also, since Jeannie is the founder of Elizabeth Ministry, Becky and Adam’s story had been told to countless people who are linked to the international ministry. Many were present at the church, and others gathered in prayer with the couple.

One morning just before Jan. 31, it took Bruce four hours to go through e-mail wishes, from Israel, Pakistan, Africa.

“This kind of prayer support was phenomenal,” said Jeannie. “And the number of people who told us they were in adoration around the Eucharist during the wedding hour made that marriage ceremony so universal.”

Becky said that the health concerns have brought her and Adam closer, and strengthened their prayer life as a couple.

“I’ve grown and my relationship with Adam has grown,” she said. “He wasn’t an extreme Catholic – he was Catholic, just not a holy roller type of person.”

Now, though, he is praying more.

“It’s helped him speed up coming (more deeply) back to the church – he was already on the road for that because of me – with me, (deeply held Catholicism) it’s part of the package,” Becky said with a chuckle.

When the news of the tumor came – on her last day of student teaching, Becky waited until the next day to tell Adam. He’s a new officer (since July) on the night beat with the Prairie du Sac police and she didn’t want him to have the news before he went to work.

While the wedding went ahead as planned, the honeymoon did not. The tumor would not allow Becky to fly, and they had tickets for a three-day cruise. So Jeannie and Bruce decided to drive the newlyweds from Kaukauna to Florida.

“I did the whole night drive – that was spiritual for me,” said Jeannie. “There’s nothing I can do (about this tumor) for my baby, but this I could do. It was an amazing spiritual moment with God.”

What did Becky think about a honeymoon with her parents?

“It felt really cool,” she said. “It’s just one of those things that’s so ridiculous that you couldn’t not have fun with it.”

Now, as she waits for the surgery, she is job-hunting. She still intends to be a teacher.

“For now, the way I see it,” she said, “I’m not just going to sit around and worry about it. That doesn’t do any good.”

She is also making soap – a hobby she developed long ago as a stress relief. She thinks she will start making it for sale, to donate the proceeds to people who face medical crises without insurance coverage.

“I am calling them ‘Soulful Soaps,'” she said. “Money from the sales will be used to help those who are denied insurance coverage for a surgery or medical procedure and need some financial assistance. I know firsthand the struggles and stress associated with the uncertainty of the ability to pay for necessary medical treatment and want to do what I can to help others in such a predicament.”

She asks for prayers, but she also wants something else:

“That people also pray for other people that are going through things like this, who don’t have a big support group and a faith community like I do. I’m not the only person in the world that is having medical problems.”