The concert will feature music from her three CDs, including her latest release, “What I Gotta Say.” She will also deliver the keynote at the Diocesan Catholic Youth Conference, 9 a.m. to 5 p.m. (session 1) and 4 to 9:30 p.m. (session 2) also on April 18 at St. Pius X. 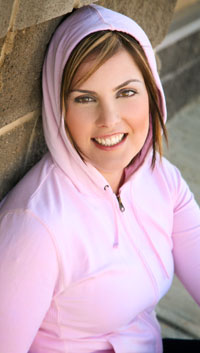 “People can expect an interactive show with praise and worship,” said Janelle, who grew up in the small French-speaking town of Legal, Alberta, Canada. “We will also get the little guy on stage to do a drum thing.”

The little guy is Janelle and husband Jason Reinhart’s 6-year-old son, Eric. The concert is part of a one-week tour and family trip. The couple’s 3-month-old son, Joshua, will also join them. Two-year-old daughter, Monique, will be spending “quality time with Grandma,” said Janelle.

All proceeds from the show benefit Catholic Youth Expeditions (CYE), founded by Fr. Quinn Mann in the summer of 2002. Expedition retreats provide faith-filled camping experiences for teens and young adults.

“I’m a big fan of Fr. Quinn,” said Janelle. “We met at the Eucharistic Congress in Quebec. We did some go-karting together and exchanged e-mail addresses.”

Janelle sang the theme song for World Youth Day 2002 in Toronto for Pope John Paul II and the nearly 1 million faithful in attendance. She also served as a spokesperson for the event. In March of 2002, she traveled to Europe, including Rome, where she met the pontiff.

“I bawled like a baby,” she said. “I had an opportunity to speak to him, but I wasn’t able to say anything because I was crying so hard. He cradled my head in his hands so I cradled his head in my hands. That was life changing for me. It renewed my love for the church.”

In 2005, Janelle released the single, “Be Not Afraid – Open Wide Your Heart,” in honor of Pope John Paul II. The song led to numerous radio and television appearances, including Dateline NBC.

Janelle began singing as a young child. She was the lead singer of a Christian band at age 14. Four years later, she moved to New Zealand to attend the Institute of World Evangelization before returning to Canada to join Life-Vision Communications.

Janelle utilizes various methods to write music. She welcomes Christ to inspire her.

“Songs can come whenever they want and wherever they want,” she said. “In the morning, Christ may fire a few lines to me. That’s kind of how it works. Often a whole song will come to me at once, which is great.”

Young people interested in the Diocesan Catholic Youth Conference may register through their parish.