This cultural presentation was one of many given over the course of their weeklong visit to Holy Cross Catholic School in Bay Settlement. The Japanese girls visited different classrooms, giving one, sometimes two, presentations a day. The presentations were interactive, involving participation and role-playing from both Holy Cross and Japanese students. 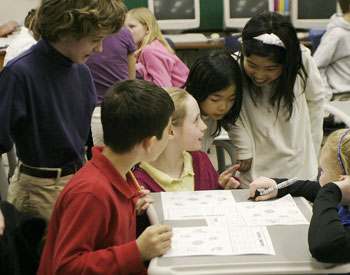 In groups, the class then solved Japanese to English translation worksheets. The Japanese girls walked from group to group, offering their help and encouragement to their American counterparts. The oldest of the Japanese girls, Nozomi Ohno, wore the friendship bracelet given to her by a new American buddy. The groups that finished with the most right won multicolored origami paper throwing stars.

From March 25 through April 4, the six girls were immersed in Wisconsin culture. Through fish and spaghetti dinners, Masses, Stations of the Cross, host families and field trips, the girls went beyond touching the lives of Holy Cross students and staff, but also the whole community of Bay Settlement.

While at Holy Cross, the six girls attended regular grade-level classes, ranging from third grade to seventh, with other students their age. Their weeklong visit also included field trips to get them better acquainted with the Green Bay area. They visited the Neville Public Museum, the Green Bay Wildlife Sanctuary and the NEW zoo.

The exchange students were especially excited about the zoo. They’d never seen a red panda, otters, moose or buffalo.

“I wanted them to experience American culture,” said Andrew Bourdelais, the girls’ English teacher. “English is tough. The (Holy Cross) kids in the class are very helpful.”

Bourdelais, 37, runs and teaches in his Cram School in Japan.

Cram schools are a popular education choice in Japan, according to Bourdelais. He explained that the regular Japanese schools are not very challenging. Comparable to American after-school piano lessons, Cram schools offer the extra hour of study. His school specializes in English. This helps students prepare for entrance into high schools and the universities.

Many parents want their children to pursue a high level of education, and start them young. Bourdelais’ Cram School is a year-long program, currently enrolling more than 170 children. His youngest pupils are 2 years old.

A UW-Oshkosh graduate who majored in international business and minored in Asian studies, Bourdelais has many ties to the Green Bay and Bay Settlement areas in particular. His sister, Heather Zeise, lives in the area, and his niece and nephew are enrolled at Holy Cross. Through this connection, the conversation about a Japanese-American exchange program between Bourdelais and Holy Cross principal Robin Jo Jensen began.

About four years ago, Bourdelais gave his first Japanese presentation at Holy Cross to his nephew’s class. According to Jensen, the children were really interested. Two years later, he returned to Holy Cross for their Halloween party and brought his daughter with him.

In May of 2008, he and Jensen wrote back and forth about possibly starting a pen pal program. They also discussed doing classroom interactions through a Web camera over the Internet, but because of the time difference between the two schools, 14 hours, it would not work.

Bourdelais decided that bringing a group of students over was the best option. Jensen was onboard.

“I wanted them to want to use English,” said Bourdelais, “so that they’d want to come to school, and see a purpose to be interested in English and using it.”

Bourdelais discussed some of the differences in education. Americans teach their toddlers to speak with nouns. The Japanese instruct their young to speak through greetings. In Japan, there’s little student interaction in the classroom. Class time is made up of what a teacher lectures. He said the girls liked the teachers at Holy Cross, because they let them contribute in the class and discuss with one another.

To get from their homes to the school building, Japanese schoolchildren travel in groups, whereas in America, travel is most often individual. Lunchtime in a Japanese school varies as well. As opposed to American school cafeterias where all the classes are mixed, young Japanese learners eat lunch inside their classrooms.

Sayori Tanaka, a fourth grade exchange student, said that she really liked staying with a host family, but she was nervous about giving presentations.

“While they were afraid upon arrival,” Bourdelais said, “the girls are feeling very welcome.”

The girls overcame some big obstacles in their venture to the United States. Because of the time difference, the girls were very jet-lagged early on. They were not used to most of the American foods. The trip took place over the girls’ spring break, and the language barrier made it difficult for them as well.

For Bourdelais, seeing the girls overcome their shyness and embrace the experience has been the best part of the trip. He said that this had exceeded his expectations for his kids.

Principal Jensen was amazed as well. Her observations have been that Holy Cross has been positively transformed by the experience.

While visiting the third grade class one morning, the entire class greeted her by proudly saying, “oh-hy-oh!” meaning “good morning” in Japanese. Another instance occurred as a part of Holy Cross’ Faith Integration Program. Each day a weekly virtue is presented along with the morning announcements. The entire school was again greeted in Japanese. She noticed it in the lunch lines too; Holy Cross students speaking to each other in Japanese greetings.

“The learning takes place between the Holy Cross and Japanese students,” Jensen said. “The language has completely blossomed. They’re really interacting, and expanding on their vocabulary. I said good morning to one (Japanese) student, who turned to me, and returned the greeting (in English).”

“I’d do it again in a heartbeat!” Tara Quidzinski exclaimed.

In anticipation for Shiga’s stay, Quidzinski’s daughter, Trudy, made up Shiga’s room and bed a month in advance. Her son, Brehme, who’s in the fifth grade, learned origami.

One of the parents said after watching their children interacting with one of the Japanese exchange students that the children have a language of their own.

“It’s not necessary to speak when you have the language of play,” said Zehms. “We saw that right away at recess. It was like someone flipped a switch. Kids teach by doing.”

“By bringing in a culture to our school,” Jensen said, “it gives a deep understanding of a different culture rather than just a knowledge of it. The relationships are formed, and now their interest expands to learn more.”