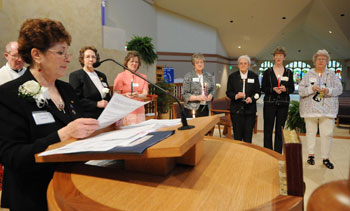 Terry Olivas, outgoing DCCW president and member of St. Paul Parish in Plainfield, said membership in the DCCW helps Catholic women answer their baptismal call to serve the church and the world. She said she joined the council in 1990 because she wanted to be around women who are “striving to model Gospel values and traditions of the church.”

“I have a daughter who is very important to me and I would like her to become actively involved in the faith as well,” she said. “I think that is the only way to do it – to be around people so I can learn to be faith filled, joy filled.”

“Look to Mary as the example,” she said. “She was young and took a risk. She said yes to something that she knew nothing about and still became one of our very best disciples.”

Attending the convention was a member of the National Council of Catholic Women’s leadership team, Evelyn Lompa of St. John Parish in Sheldon, Wis., located in the Diocese of Superior. Lompa, who has been active in the council for 40 years, said the council still has a place for women in the church today. She said membership is one way for young women to practice their faith. “I would say come and try it, come and see what we do. Be part of us. We need you.”

In his homily, Bishop Ricken recognized the DCCW’s contributions. He cited a list of projects they have been involved in over the years, including vacation Bible schools, assisting migrant workers, promoting The Compass and working with youth at Camp Tekakwitha.

Today, he added, the women are involved in projects such as Water for Life, which helps provide clean water for people in the Third World, and collecting items for the Salvatorian Mission Warehouse in New Holstein.

“On behalf of the diocese, I want to thank you for the times you have been close to the church and her suffering,” said the bishop. “I want to thank you as an organization and as individuals for the love of your husbands, your families, for your participation in your parish and in the diocese.”