His first assignment was as assistant at St. Francis Xavier Cathedral in Green Bay, where he established a Catholic Youth Organization (CYO) branch. The young men there were going off to WWII. 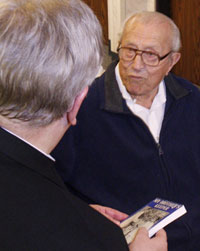 “My men went into the service in those days and they asked me if I would come and join, which I did,” he told The Compass last year, on his 70th jubilee. He joined the Army Air Corps in 1943.

It was the beginning of a world-trotting journey that took him to Germany, Burma, Vietnam, South America and India. He served as a chaplain in the U.S. Air Force from 1943 to 46 and later held the rank of lieutenant colonel in the Air Force Reserves.

After a short return to the diocese, serving as an assistant pastor in Oshkosh, Shawano and Sturgeon Bay, he earned his pilot’s license. He returned to Europe to work with the National Catholic Welfare Conference and became director of Catholic Relief Services in Germany from 1948 to 53. He received the Legion of Merit Award from the German government in 1953.

Fr. Schneider was then transferred to relief work in India and Pakistan and, later, Vietnam and Burma. His work included helping Mother Teresa get her first ambulance.

When he returned to the diocese, he was appointed pastor of St. Charles Borromeo Parish, Lena (1956), while also serving as diocesan director of rural life. In 1959, he again went to work with Catholic Relief Services in South America. His 1981 book “My Brother’s Keeper,” was an account of his overseas experiences.

In a 1998 interview with The Compass, he said he had kept paper currency from each country he had visited over the years. Taped together, they stretched to 32 feet.

“My biggest satisfaction is that I could help feed thousands upon thousands of people who were hungry,” he said at the time.

He served as chaplain for the Veterans of Foreign Wars and became national VFW chaplain in 1987.

Msgr. Schneider retired on July 1, 1982, and resided in Manitowoc. He guided many pilgrimages to the Holy Land and Europe during his retirement.

Reception of the body by the Regional Vicar, Fr. Richard Klingeisen, was scheduled at 4 p.m. on Wednesday, April 29, at Good Shepherd Church, Chilton, with visitation to follow.

The funeral Liturgy was scheduled for at 11:30 a.m. on April 30, at Good Shepherd. Bishop David L. Ricken was to be presider and Fr. William Rickert to deliver the homily. Burial will be at St. Mary Cemetery, Chilton.

He is survived by a brother and sister-in-law: Henry (Odie) Schneider, Hilbert; two sisters: Ann Becker, Kansas City, Mo. and Eleanor Woelfel, Appleton; nieces, nephews and other relatives and friends. A memorial fund has been established.

Last year, when asked what about the highlights of his priesthood, Msgr. Schneider said, “The most interesting thing was meeting people.”