“My grandmother is 99, so I thought the call may have been about her,” said Rich, principal and administrator of faith formation at Holy Rosary Parish and School. “My mother was crying on the phone. The first thing you start doing is praying. I sent out e-mails asking as many people as I could to pray for him, as did many others.” 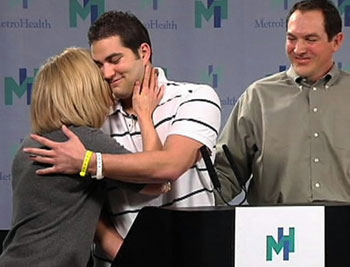 According to Jory’s mother, Debb Wolfram, doctors at MetroHealth Medical Center in Cleveland did not expect her son to survive the first night. The prognosis turned out to be false. While the bullet passed through two lobes of Jory’s brain, amazingly, it missed the major arteries and brain centers.

According to Dr. Robert Geertman, Jory’s neurosurgeon, his patient’s recovery is “one in a million.”

“My jaw was on the floor after a day or two of seeing he is hanging on,” he added.

“We certainly believe it is miraculous,” said Wolfram. “That was the consensus of several doctors, not just one.”

Jory dealt with an awful amount of pain, she added. He was moved from ICU to a trauma floor on March 5 and then to the MetroHealth Brain Injury Rehabilitation Unit on March 10. Although Jory suffered from severe headaches, he completed daily physical, speech and occupational therapy. He was walking, supervised with the aid of a walker, within the first week. His rehabilitation also included neurological music therapy. Jory was discharged from the hospital on March 31.

A graduate of Aquin High School in Freeport, Ill. where he was a talented football player and musician, and Bowling Green State University (Ohio), Jory continues his recovery through an outpatient program. He hopes to return to his job at the microbiology lab at Cleveland Clinic.

During his hospital stay, Fr. Arthur Snedeker, the chaplain at MetroHealth, gave Jory the last of 12 rosaries blessed for the hospital by Pope John Paul II leading to a possible connection to the sainthood process for the late pontiff. Fr. Snedeker had asked Pope John Paul II, through prayer, to pray for Jory and to protect him.

According to Catholic News Service, currently a presumed miracle through the intercession of the late pope – involving a French nun said to have been cured of Parkinson’s disease – is being studied in a five-step process in Rome that involves medical experts, a medical board, theological consultors, the members of the Congregation for Saints’ Causes and, finally, Pope Benedict XVI. The sainthood process generally requires two miracles occurring through the intercession of the candidate, one for beatification and one for canonization.

The media attention surrounding Jory’s recovery has been overwhelming, said Wolfram. She added that her son is touched when people mention the presence of God in their get well wishes.

“He believes this happened for a reason,” said Wolfram. “God answered our prayers.”

She asked that people also keep Pechanec and his family in their thoughts and prayers.

Rich said he has been inspired by the outpouring of faith for Jory.

“I hear back from people through e-mails,” he said. “They want this miracle to continue and will keep this prayer chain going.”