Sanchez changes attitudes by her example

Active in church and civic programs, young Hispanic leader is guided by her faith

GREEN BAY — Erika Sanchez knows that her accent and skin color set her apart from most people in Green Bay. “Sometimes people make you feel bad because of the accent, because you look different,” she said, “But that’s something I’m not going to change.”

Instead of feeling resentment or anger, Sanchez channels her energy into positive outlets. While she cannot change people’s first impressions about her, or about other immigrants, she knows she can make an impact by her example. 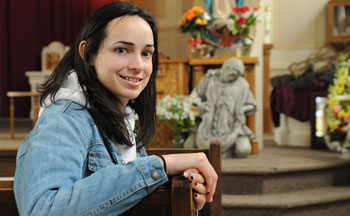 (Sam Lucero | For The Compass)

That is why Sanchez, 23, has immersed herself in a variety of church and community projects, helping people on the fringes of society.

At St. Willebrord Parish, where her family is active, Sanchez serves as a consultant to the Hispanic youth ministry program. She is a full-time student at UW-Green Bay and is enrolled in the Green Bay Diocese’s “Discipulos de Cristo” lay ministry program.

Next month, Sanchez will receive a certificate in lay ministry as a member of the Discipulos de Cristo’s first graduating class.

“God has a mission for everyone. That’s something I believe,” said Sanchez. “And for me, I like to help other people through the church and different organizations. Having the knowledge, it’s a way to prove that I can do something.”

In a short time, she’s proven she can be a leader – in the Hispanic community and the church community.

Sanchez was born in Zapopan, a city in the state of Jalisco, Mexico. Like other immigrants, her father, Miguel, came to the United States to work, first in California and then in Wisconsin. He applied for residency status in 1986 while in California. Eight years ago, he applied and received his U.S. citizenship.

After becoming a citizen, her father was able to bring his wife, Josefina, and children here in September of 2003. “He wanted us to come in the right way,” said Sanchez, who is a legal resident, but has not applied for permanent citizenship. “It’s kind of expensive. Probably around $2,000.”

Leaving her extended family in Mexico was difficult, said Sanchez. “My grandparents, uncles, cousins – everyone lives there. The only ones here are us,” added Sanchez, who has three sisters and four brothers.

Sanchez said the transition to life in Wisconsin was challenging due to the language barrier. She found solace at St. Willebrord’s, which has a vibrant Hispanic outreach. Within a few weeks of her arrival, she was helping her father with the Spanish-language RCIA program and then with youth ministry.

She is in her fourth year of organizing the parish’s annual Lenten Hispanic youth retreat. “When I got here, there were like 70 kids. Now we get 110 to 150,” she said. “I’m thinking of retiring already.”

Last fall she helped organize an immigration rally and march that began at St. Philip Church and ended at St. Francis Xavier Cathedral. In January, she was instrumental in planning a successful immigration reform meeting at St. Willebrord.

Sanchez knows that immigration reform is a delicate issue. She said people are too quick to stereotype Hispanics and other people of color. Her answer is to prove people wrong.

“There’s a lot of racism going on. So I told myself, ‘Well, I’m not going to wait until someone changes that,'” she said. “Someone has to do it and I’m going to do my part. A little at a time. That’s why I think I do so many things and get involved in so many others. That’s my belief – little by little, we will make something big.”

Outside of church, Sanchez works part-time at the Sexual Assault Center of Family Services and volunteers with the Girl Scouts, Habitat for Humanity and the Harmony Cafe.

She said her Catholic faith demands that she treats others with respect, even if she does not always receive it.

She believes that seeing Christ in others will help her react to situations in a positive way.

“I have to see God and Jesus in each one of our brothers and sisters. That’s something that the Catholic religion teaches and I think that’s something really important,” added Sanchez. “Every time I see someone, even if they treat me bad sometimes, I have to think to myself, ‘Well, that’s a son of God. Somewhere there is Jesus.'”

The lesson Sanchez says she wants to teach others, Latinos and Anglos, is that judging people is not God’s way.

“Everywhere I go, I have to demonstrate I have the qualities,” she added. “They judge me at the beginning because I’m from another place. I speak differently, I look differently. … Everyone judges too quickly. Someone said, ‘If God is going to judge us on the last day, why are we judging each other right now?'”