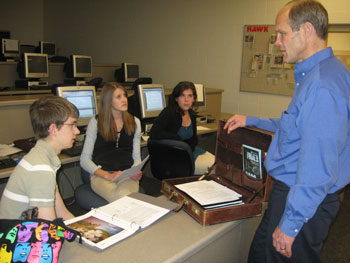 “It’s a competition where there’s a fictitious legal case that the students have to act as the attorneys and the witnesses. It’s a big mental chess game, basically, to try – within the legal confines of all the rules – to outsmart and outwit the other team and prove your case better than the other team does.”

While the team had five months to prepare their case for regional competition, they have only five weeks to prepare a different case for nationals and the practicing has been intense. “This case is a murder trial,” explained Brellenthin. “It’s based around an art museum and a painting that was stolen. It’s a matter of whether this person shot another person intentionally or it was out of self defense.”

During the regular season, 12 students are on the team. However, rules allow only eight members to perform at nationals. The students who will be competing in Atlanta are team captains Patrick Dubois and Sarah Dickhut, who will act as attorneys, McKenzie Mayer, another attorney, Abby Yazbak, Rita DeMerit and Pat Revord, who are witnesses for the defense, and Luke Dremel and Katy Faust, witnesses for the prosecution.

“They’re very excited, it’s an unprecedented event for us,” said Brellenthin. “It’s going to be a once-in-a-lifetime event to do something like this on a national level.”

Like other co-curricular activities at Xavier, faith is integral part of mock trial. “We pray before every competition and we went to church together the day before the state competition. When there was a scoring calculation error at state the entire team prayed the rosary together for the outcome of the competition that the result would be whatever God wanted.”

Dickhut has been on the varsity mock trial team for four years. “My freshman year I didn’t really know what it was but it sounded fun, so I decided to try out,” she said. “It really opened the door to the possibility of a law career for me.”

Seeing all their hard work pay off has been a good experience, she added, but they have more work ahead of them.

The team wants to do well in Atlanta.

“I have no idea how good the competition is so we’re going to prepare our case as best we can and give it our best shot when we get down there,” said Dickhut. “I hope we can walk away from it with no regrets. I want to go down there and have everyone walk away saying, ‘I did the best I could, I worked hard, and I’m proud to have gotten this far.'”

Mock trial parent Darlene Yazbak is proud of the entire team. “I’ve always thought they were really good. This year it was very, very clear that they were really strong. They’ve got such incredible depth going into JV.”

A veteran of mock trials herself, she gives the students credit for taking on such a challenging event, especially since many of them are taking AP classes, participate in sports and have jobs. “They have to be able to balance school and anything after school, along with these practices that require a lot of study. There aren’t a lot of kids that can really do that. It’s nice for the parents to see them recognized.”

Yazbak knows what outcome she would like to see for the Xavier mock trial team from their trip to nationals. “Even if they don’t win or come close to winning, I hope they come out of it with a sense of accomplishment and that it was all worth it.”