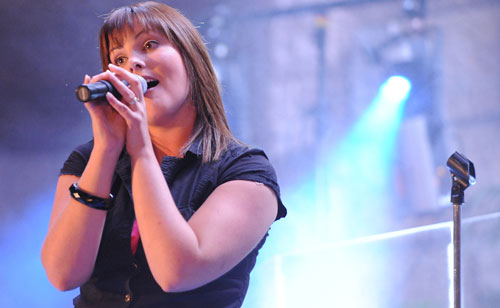 Janelle sings during the Diocesan Catholic Youth Conference held at St. Pius X Church in Appleton April 18. The Canadian singer shared her story of chastity with about 100 young people who attended the event. (Sam Lucero | The Compass)

Janelle, a native of Alberta, Canada, sang two songs for the approximately 100 young people attending the event. Sandwiched between her songs, Janelle shared her own story of choosing to remain chaste until she was married.

She told the audience that her adventure in fidelity began at age 12, when her parents encouraged her to start praying for her future spouse. By age 15 she said she prayed that her future spouse would be a provider, a protector and a prayer warrior.

Janelle said she later was torn between two men who met her criteria. One later became a Redemptorist priest and the other, Jason Reinhart, her husband.

“Our first kiss was our wedding kiss to seal our wedding vows,” said Janelle. “That night, I gave him the chastity ring I had been wearing since I was 16. He still wears it today.”

Janelle’s husband is a member of her band, ONE80. Their 6-year-old son, Eric, joined them on stage, playing drums and guitar.

She told the young people that when they are faithful to Christ in little things, “he blesses us with bigger things.”

“I could have chosen a different path and it probably would have worked out,” she said, “but was that God’s perfect will for me? No. Every decision that we make either leads us closer to heaven or further away.”

She encouraged the group to think about the decisions they make.

“Every decision creates a habit and every habit creates a lifestyle,” she explained. “Just because you get a ring on your finger one day doesn’t mean that a lifestyle gets switched on or off like a light. Lifestyles take time to build or undo.”

Her parting message: “Feel free to dream big. Christ dreams big for you.”

This year’s youth conference, sponsored by the Department of Education, was a collaborative effort. Assisting in the event was Catholic Youth Expeditions (CYE), founded by Fr. Quinn Mann in 2002. Following the youth conference, a benefit for CYE was held and included a concert by Janelle.

“I think Janelle had a great message,” said Fr. Mann, who celebrated Mass for the youth. “Definitely talking about chastity and the meaning of our human sexuality; it’s a message that our young people need to hear.”

Fr. Mann said the two events at St. Pius point to a positive future for youth and young adult ministry in the diocese, which ultimately bodes well for vocations.

“We’re excited with the direction (Bishop David Ricken) is (setting) on vocations,” he said. “For vocations to take hold, we need to do the work of discipleship with young people, because you’re not going to be open to the gift of the priesthood or religious life as a sister until you are open to a relationship with Christ.”

He said working with the Education department to sponsor a youth conference was an example of different ministries working together for the same goal of evangelization.

“This came together very quick. I’m just glad CYE was able to work with them to provide a day for young people. We didn’t have the promotion that we wanted, but we didn’t have (a diocesan) youth director,” he added. “I think any time we can collaborate and work together, that is really important.”