When it came to choosing an RCIA sponsor, “I was thinking I didn’t know a more religious person than Sue,” said Brian of his mother-in-law, Sue Mulroy. “She’s been a great influence in my life since the day I met her. Always kind, caring, compassionate. I could have chosen my wife, but I thought that, as I enter the Catholic religion, I couldn’t think of a better person. A lot of people ask her questions about religions – she has Bible study and church group, so I couldn’t think of a better person.” 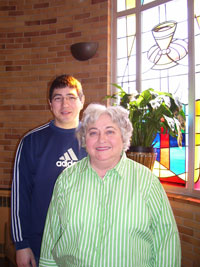 Brian Ziegert is pictured with his mother-in-law, Sue Mulroy, inside St. Gabriel Church, where Brian will be received into the church at the Easter Vigil this Saturday. (Patricia Kasten | The Compass)

Brian means it; he and his wife, Sara, just built a new home – complete with a mother-in-law suite. Having his mother-in-law so close by is, he said, “a tremendous opportunity for us.” Then he laughed, “After all, someone’s got to play cards with her.”

His brother-in-law, Ryan, and Ryan’s wife, Julie, also built their house across the street from Brian and Sara.

Sue, for her part, knew nothing of the building plans until Brian and Sara took her out to see the property they had chosen and found that it was right across from Ryan’s.

“They told me, ‘You can live here, or there, as long as you want.’ I hadn’t been aware this was going on. It wasn’t even discussed,” Sue said. “It was flattering, that anyone would care enough to do that.”

She also remembers asking Brian, “Do you really know what you’re getting into?”

Brian did. He has known Sue for almost 10 years. He had just starting dating Sara and had had dinner with Sue and her husband, John, at the end of summer. That was to be their only meeting as a foursome.

About a month later, on Sept. 5, 1999, Sue and John were riding their bikes on a recreational trail, west of Neenah. Two teenagers were racing cars on nearby County Highway CB. One driver lost control, jumped the curb and went onto the bike trail. John and Sue were struck. John, a high school guidance counselor, died. Sue was in the hospital for four months. She still uses a cane.

Brian, then 20, had “stepped away from the church for awhile” and had even been questioning the existence of God. His parents had been divorced when he was young; his grandparents had died when he was a child. The accident “made me question a lot of things even more. They were devout Catholics, and to see something like that happen to people like that made me question the existence of God.”

However, Brian also saw Sara’s devotion to her Catholic faith and to God during the accident’s aftermath.

“That really started changing my opinion about religion and was the start of my growth in my faith in God,” Brian said.
Today, he now looks back on the accident as “the turning point for me, it was the initiation of my faith, of really looking to God.”

He went on to graduate from Milwaukee School of Engineering and is now a senior engineer at Alcan Packaging in Neenah. He and Sara were married at Sara’s church, St. Gabriel the Archangel, on Aug. 23, 2003. They now have two daughters, Madison (3 1/2 ) and Grace Suzanne, who was born on Jan. 6 and is named for Sue.

“A lot of things turned positive in my life after my faith came back to me,” Brian said.

He continued to explore the Catholic faith – he had been born and raised Lutheran – and finally asked about the RCIA process last year, approaching Sue first.

“I never brought it up or talked to him about becoming Catholic. I view it as nagging. I just stayed away from it completely,” said Sue, who had proudly watched her daughter-in-law, Julie, go through RCIA at St. Gabriel six years ago.

Brian wondered if Sue would be surprised that he wanted to enter the church.

When he asked, Sue said, “I’ve been praying about it for five years.”

Being in the RCIA process has been, Brian said, “another point in my journey and my growth in my faith, to be part of the Catholic community. It’s something they talk a lot about during RCIA, that the church itself is a community, that faith is a community and that you bring God to church with you every Sunday, every day that you come.”

And he finds it’s not just his wife or his mother-in-law who are helping him learn about his faith. His daughter, Madison, is teaching him as well. Every night, he and Madison pray together.

“If I forget or we’re busy,” Brian said, “she always comes out and finds me: ‘Daddy, Daddy, we need to say our prayer.’ That’s really special to me right now, a daily reminder.”

“I look at children as a blessing,” he added, “and every moment spent with them is another confirmation of faith. They’re wonderful people; it’s fun to see them grow. It’s kind of like your faith (life). You learn a little bit, and a little bit, and before you know it, you’re an adult.”

When he was young like Madison, Brian loved to build with Legos. Today, he loves building the pieces of his faith.

“When I was going through this (learning about faith) in my teen years, it was sort of forced on me and I didn’t pay attention,” Brian said. “We had to memorize. That wasn’t valid for me, or something that hit home. But now, going through this on my own, learning about the traditions of faith, it really sinks in. It’s been a wonderful journey. It’s not over (with Easter), it’s just the beginning and I look forward to it.”