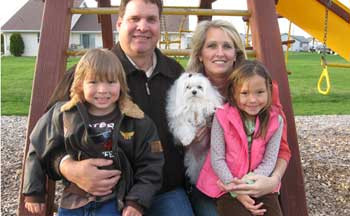 Joel and Deanna Williams are pictured with their adopted children, Dmitry and Yana. (Amanda Lauer | For The Compass)

“It’s harder than any other holiday because of how close Bradley and Deanna were,” said Joel. “It’s hard for Joel that I don’t have Bradley on Mother’s Day,” added Deanna.

She recalled that soon after Bradley died people asked her and Joel if they ever would consider adopting or foster care. “No one’s ready to hear that right away.” But they were open to the guidance of the Holy Spirit.

“We had people that called and said, ‘We don’t know you but we have something for you.’ It was a sculpted Pieta from Italy. The night Bradley died a lady (who asked to remain anonymous) said she was in her kitchen and was compelled by the Holy Spirit to tell us that we were supposed to adopt. Her husband felt they were supposed to give us the Pieta for some reason,” said Deanna.

“We would go to lunch and she’d say every once in a while, ‘Have you guys ever considered adopting?’ A year after Brad died she said to herself, ‘This is the last time I’m going to bring it up.’ She felt God was telling her to tell us this.”

Joel said they began praying about adoption. “Our thought process was, ‘We can’t replace Bradley,'” he said.

“All of a sudden it occurred to us that we were going to be helping somebody else, not replacing Bradley,” said Deanna. “One thing we know we can do is love a child and take care of them and raise them.”

Their first thought was to adopt a baby girl. “Then we said if there is a sibling, we’d adopt two. Then we thought in order to really help somebody it might be best to do an international adoption and for some reason Deanna starting getting all these signs about Russia,” said Joel.

“European Adoption Consultants told us that we had a better chance of getting a baby girl from the Ukraine,” said Deanna. They started the process of adopting from the Ukraine but when months passed with no word, it was discovered that the paperwork was lost.

In the fall of 2007, staff members of the adoption agency were conducting a meeting and discussing the Williams’ case. “While they were having this meeting, two absolutely gorgeous kids popped up on the computer and they were just released for adoption,” said Deanna. The children were siblings, a 6-year-old girl named Yana and her 4-year-old brother Dmitry, from Russia.

“We took them immediately,” she said. “It was amazing how it all worked out. I know these kids were totally hand picked. There was not a doubt in my mind that God and Bradley found them and brought them to our family.”

Joel and Deanna got to meet their new children for the first time in November of 2007. “I prayed the whole entire time traveling there,” said Deanna. “I asked Bradley and I asked God to please let all our hearts connect. The four of us, we knew instantly.”

On Jan. 25, 2008, the couple went to court in Russia to finalize the adoption. “One of the first questions the judge asked was, ‘Are you trying to replace Bradley?’ Joel said ‘Bradley isn’t replaceable, we just love them for them,'” recalled Deanna.

The children were soon enrolled at St. Mary School in Greenville. “We feel like we have three kids,” she noted. “They act like Bradley’s just part of the family. Yana is so unbelievably faithful. It almost seems like she’s connected to Bradley.”

Mother’s Day will always be bittersweet for Deanna and Joel. “Our lives have definitely been directed in ways we never could have imagined,” Deanna concluded. “Yana and Dmitry are our little miracles from God, but without being open and listening to God’s plan for us, we never would have had the experience of sharing our lives with two children who needed us as much as we needed them.”