Changes in Episcopal Church lead Kost to the Catholic faith

These changes have resulted in a schism within the Episcopal Church. 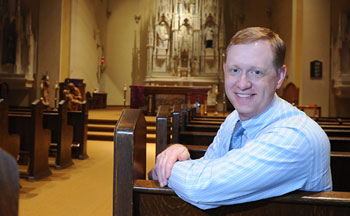 John Kost, pictured inside Good Shepherd Church in Chilton, was received into the Catholic faith at the Easter Vigil April 11. Kost was formerly a member of the Episcopal Church. (Sam Lucero | The Compass)

The Episcopal Church is part of the worldwide Anglican Communion, which is comprised of some 80 million members in 44 regional and national member churches around the globe in more than 160 countries.

“What I believed as God’s teachings, I was just not seeing it in the Episcopal Church any longer,” said Kost in an interview with The Compass in April. “As much as it hurt me, I began trying to find another spiritual home.”

Born and raised in Iowa, Kost graduated from South Hamilton Public Schools in 1988 and went on to earn his bachelor’s degree in agriculture in 1996 from Iowa State University in Ames. In 2000, he received a master’s degree in water and soil science from ISU.

While at Iowa State, he met his wife, Carrie, and they were married in May 2000 at St. John’s by the Campus Episcopal Church in Ames. They have one son, Jack, 5. The Kosts moved to Manitowoc after Carrie took a job with Milk Products Inc., in Chilton in 2002. The following year they moved to Chilton.

Kost, who is emergency services director at the American Red Cross in Appleton, said that after moving to Wisconsin, he began attending services at other Protestant churches, including a Methodist and two Lutheran churches. “As open as those churches were to me, there was no spiritual connection there,” he said. “I did not spiritually feel God’s or Christ’s presence. I then took some time away from my journey.”

One day, while on his way to work in Appleton, he decided to stop by Good Shepherd Church.

“I would always marvel at how beautiful this church looked and began wondering if it was time to explore the Catholic Church,” he said. “Before I visited this parish, I began doing some reading on the Catholic faith and watching EWTN and learning more about the Catholic faith.”

Kost credits the Eternal Word Television Network and its hosts, especially Fr. John Corapi, for giving him answers to questions about the Catholic faith. He said he was drawn to Fr. Corapi’s explanations about church teachings.

“When it came to church teachings, it’s black and white,” he said about Fr. Corapi’s explanations. “In this time of uncertainty within the Episcopal Church, and with uncertainty in my life, it was very comforting to sit down and listen to Fr. John Corapi give a very clear voice in church teachings. From listening to what he had to say, I found my spiritual well-being drawn to that.”

Kost decided to pay a visit to Good Shepherd Church. “One day I got out of work early, walked to the rectory and inquired that I wanted to learn more about the Catholic faith. I wasn’t expecting anything to happen immediately on that day,” he said.

But Deacon Dennis Bennin, who directs the parish’s Rite of Christian Initiation of Adults (RCIA), was in the office. “He spent an hour with me and we talked about the Catholic faith – and my spiritual journey,” said Kost.

With the permission of the pastor, Fr. Greg Smith (who passed away in 2006), Kost began attending services at Good Shepherd.

He said he felt at ease during his time at church. “I then took a little more time to really contemplate, to think through if this was the direction I wanted to go.”

Part of the discernment process was telling his wife and parents about his plans to join the Catholic faith.

Carrie, who remains Episcopalian, has been supportive, he said.

“Carrie is still on her spiritual journey. She’s very happy for me. She’s a very good Christian, she just hasn’t found her home yet,” he said.

His parents, who have also struggled with the Episcopal Church’s direction, accepted his decision.

“They wanted me to find a spiritual home,” he said. “They know how I’ve struggled with it. It’s been hard. It’s been a very trying journey. When I told them I was going to convert to the Catholic faith and go through the RCIA, they were very supportive.”

Kost said he found the RCIA provided the setting to learn and grow in his faith.

“I’ve learned more about the Christian faith than I ever have,” he said. “It’s been very eye-opening. It’s a spiritual preparation that a person goes through as they learn more about what they are, what they believe. It’s a very humble experience at the same time.”

He also credits Deacon Bennin, his pastor, Fr. Bob Kollath, and his sponsor, Jerry Mallmann, for helping to prepare him for his initiation into the church.

As he begins his first Easter season in full communion with the Catholic faith, Kost said he knows he’s found his spiritual home. “When I came to this church and started my conversion, I knew there was a presence, you could feel it,” said Kost. “You know that this is where you’re supposed to be.”