In that confessional was the first time she ever told anybody that she had been abused. 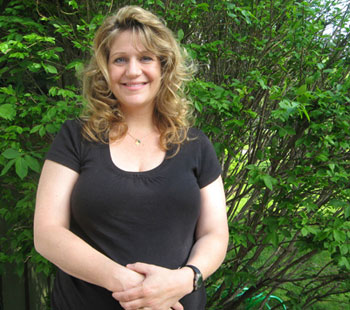 “I felt like God was cleaning me, like a miracle had happened,” recalled King. “I had this peace. The priest told me I should talk to my mother and so I did. My mom put me in counseling but at that time the law didn’t require that counselors report to the authorities. In eighth grade I finally told someone outside the family and I was placed in foster care.”

When King’s father discovered she was in foster care he brought her back to California. She lived with him for two years until her mother divorced her stepfather and then moved back to Wisconsin. Shortly after graduating from high school, King became pregnant. As a single parent, it took her five and one-half years to earn her degree in psychology from Viterbo College in La Crosse, where she ended up meeting her future husband.

“I had a conversion experience in college before Shawn and I were married, which prompted me to say, ‘We’re getting married, we’re not going to live together,’” recalled King. “A friend of his who was raised a devout Catholic came to Shawn’s graduation with his girlfriend. I thought it was strange that even though they were staying overnight they didn’t sleep together in the same room. They said they were waiting until they got married,” said King.

“She was wearing a miraculous medal and when she told me about all the cool stuff associated with it, I was blown away. I thought, ‘That is so awesome. You get these graces from God and we just have to ask for them.’ It made me start thinking about faith again. She sent me a miraculous medal in the mail. I started slowly experiencing all kinds of crazy stuff like I felt God was really speaking to me. I felt drawn to come back to church. I started going to Mass and praying the rosary.”

After King and her family moved to the Fox Cities in the 1990s she got involved with the Fox Valley chapter of Wisconsin Right to Life and started giving speeches on the subject of chastity.

“I felt the way to stop abortion is to have girls realize they have worth and value and they don’t need to have sex outside of marriage, they’re worth waiting for,” said King. “I had been going out to the abortion facility and, no matter how much I prayed, cars kept showing up. It was disheartening. I felt God was saying to me, ‘Those girls don’t want to be here, this is what they’ve convinced themselves they have to do. Why don’t you go talk to them like somebody should have to you before you ended up in that situation?’”

Promoting chastity made sense to King.

“If I can make chastity something plausible that kids will consider, then they won’t end up being pregnant and then it won’t matter if there’s an abortion facility on every street corner of America,” she reasoned.

King, who has seven children — Maegan, 19, Sarah, 13, Elisha, 11, Gabriel, 10, AnnaMarie, 8, Mercedes, 5, Christopher, 3 — and one due in July, has spoken to thousands of teens throughout the country in the past eight years and many parents as well. “The church teaches that parents are the primary educators. You can inspire a young person but if the parents aren’t onboard, everything can be undone.”

Kids have been very receptive to King’s message. “Maybe it’s because I was abused and I have true genuine empathy for the silent suffering and the longing that young people have to be cared for and loved,” she said. “I understand why they’re so eager to give themselves away and not see themselves as valuable, because I did it myself.”

It’s a fulfilling life for King. “I feel so gratified because all I ever want to do with my life is have a loving relationship with my husband, get myself and my kids and my husband to heaven and to use the gifts that God gave me to fulfill his plan for my life. I feel that this is my plan.”