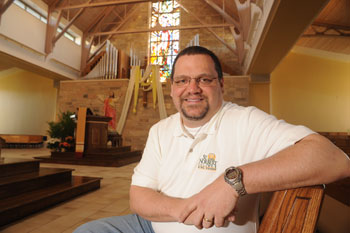 Among the custom programs featured on the St. Norbert Web site, the tech crew began airing the Common Prayer Service. Common Prayer is a unique non-denominational prayer that takes place every Wednesday morning on campus. No classes are scheduled during this time. It is an opportunity for a campus-wide, midweek reflection of coming together.

Scott and his wife Tricia have been married for 22 years. They have three daughters. The oldest is a freshman at St. Norbert College. Of the younger two, one is a senior and the other a freshman, both in high school. All three daughters went to Our Lady of Lourdes School.

Although Tricia Crevier is Lutheran, she and Scott both agreed to have the girls baptized and raised in the Catholic faith. Scott, Tricia and the family all go to Mass together.

“The difference in religion is not an issue for us,” Crevier said. “We definitely focus on what we have in common. Both of us are Christian; we can focus on this.”

He enjoys having his family together, especially for dinner. For Crevier, it is a time of prayer, to come home with all the family there. Knowing his girls and their friends makes home a comfortable place for everybody, he said.

Originally from Green Bay, Crevier received a degree from NWTI (now NWTC). Not knowing what he was being called to do, he moved to California. While working there, Crevier met his future wife and also discovered his new passion – computer science.

“If you’re 20 years old and don’t know what you’re going to do with your life, it’s not a bad thing. It’s normal,” said Crevier. “I didn’t know what I wanted to do then.”

In 1997, the Crevier family moved to De Pere. In what Crevier calls a strange set of circumstances, they bought a house a block from Our Lady of Lourdes Church and less than two miles from where he works. Parish life has been a blessing for them.

“It’s a good, vibrant faith community,” Crevier said. “There were lots of ways to give back.”
The Creviers have been members of Our Lady of Lourdes in DePere for 12 years. Several times, Scott has traveled with a mission group through the parish to New Orleans with Catholic Charities to help victims of Hurricane Katrina. Crevier is also a member of the Knights of Columbus and uses his knowledge of computer science to maintain the KC Web site.

Crevier also realized that his ability to sing and perform could also be used as a means of service to the church.

For eight years, Crevier performed with a quartet called GQ4. Together, the four entertained at dinners and luncheons. Crevier liked the spotlight and played off the audience and his co-cast. They soon began incorporating a few Christian songs into their lineup during the act.

“We got great responses from people,” exclaimed Crevier.

Although the group disbanded, the members are still friends. Aside from a brief reunion for a national anthem performance at a UW-Green Bay women’s basketball game, the members of GQ4 are now solo acts.

“I sing with the church choir now to get my fix,” Crevier said.

The Triduum Masses are his favorite to sing for, finding the Good Friday service’s music deep, appropriate and especially meaningful.

Besides singing in the church choir, serving as a lector and as an extraordinary minister of holy Communion, Crevier also teaches high school religious education. This has been the most rewarding line of ministry for him.

He did not expect to be asked to teach 10th grade religious education, but quickly agreed to do it. The theme of the class was “what it means to be Catholic.” This started as a positive challenge for him to figure out for himself what his faith is to help the students know theirs.

When he returned the following year to teach again, he stayed with that junior class. Crevier looked forward to teaching their confirmation class. He’d been with them when they discovered what it means to be Catholic, now as they were starting to prepare to make the big decision they were together for it again. In the parish, over 50 were to be confirmed, Crevier lead a group of 10.

“When I sit down with 10 students, this is just 11 of us talking about our faith,” explained Scott Crevier. “They know that I’m one of them. I’m just there to facilitate. I’m no different than the other 10 of them. We all have questions and different perspectives. We talk about anything and everything.”