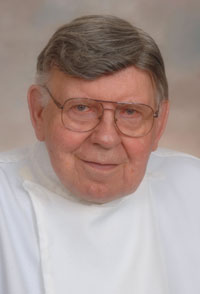 Fr. Cornell was only the second Catholic priest to be elected to the U.S. Congress – the other was Jesuit Fr. Robert Drinan, with whom Fr. Cornell served in Congress. A third Catholic priest, Fr. Gabriel Richard, was a nonvoting delegate from the Michigan Territory from 1823 to 1825.

Fr. Cornell was a member of the Congressional Education and Labor committees as well as the Veterans Affairs Committee. He worked to reform the welfare system and to get more educational benefits for Vietnam vets. Most of his salary as congressman was used for internships in his Washington office for residents of Northeastern Wisconsin and for student aid at all the schools of higher education in the Eighth Congressional District.

Fr. Cornell was named by the Wisconsin diocesan newspapers in 1998 as one of “45 Who Made a Difference” in the first 150 years of Wisconsin Catholic history. The Wisconsin governor declared Dec. 16, 1984, the priest’s 65th birthday, as Bob Cornell Day in the state.

In a 2007 interview with The Compass, Fr. Cornell said that when he arrived on Capitol Hill, he “asked older and newer members about whether I should wear clerical garb and usually they responded, ‘Wear whatever you feel comfortable wearing. One of the things you need here is identification and clerical garb gives you identification.’ I went ahead and wore clerical garb.”

Norbertine Fr. Alfred McBride first met Fr. Cornell 65 years ago. “I was a sophomore (at Southeast Catholic High School in South Philadelphia) and he was my home room teacher,” he said. “He was very well organized and ran a very good class.”

At the time, Fr. Cornell was not yet ordained. Fr. McBride attended his ordination in 1944. “When I decided to join the order – there were five us coming from the school – we got to the (railroad station) and Bob Cornell was the only one there to say goodbye to us. It was very comforting to have him take an interest in us.”

Fr. McBride said he became friends with his former teacher when Fr. Cornell was elected to his first term in Congress. Fr. McBride was working at the National Catholic Educational Association in Washington D.C. and Fr. Cornell lived with him for one year. “We got to know each other very well. I learned about his interest in politics and how he got interested in it,” said Fr. McBride.

“He said, ‘I have been preaching the church’s social teachings all of my priestly life, but I would like to do something where I could make it happen. I thought that politics was a very good way to do that,'” said Fr. McBride. “He had an instinctive love for the poor, the underdog and people that had no voice to speak for them. That’s what he liked to do.”

The priest-congressman was proud of his vocation, said Fr. McBride. “He wore his collar and his black suit all of the time while he was in Congress.”

After two terms in office, Fr. Cornell lost his reelection in 1978. “Then he started running again in 1980 and that’s when the pope and the local bishop said he doesn’t want any priest in elective office,” recalled Fr. McBride. “It was hard on him. I said to him, ‘I think you have to withdraw, it’s just not going to work. He withdrew and returned to teaching here at St. Norbert’s.”

When Fr. McBride returned to De Pere in 2003, the two men reconnected. “He lived down the hall from me. The last six years we’ve been very close,” he said.

“As a history major at St. Norbert in the 1980s, I had him as a teacher twice before I entered the Norbertine order,” he said. “Perhaps the most memorable story of Fr. Cornell that he ever shared with our class was his explanation on how and why he got involved with politics.

Strong example to others

“He knew that preaching and teaching were ways for some priests to promote Catholic social teaching, but aware of his own personal strengths, he pursued political involvement as a means to live out his baptismal call. Until the day he died, he was a strong example for all of us, inside and outside of church ministry, on the necessity of political engagement.”

When he was elected to Congress in 1974, he defeated Rep. Harold Froehlich, the only Republican on the House Judiciary Committee to vote for the impeachment of President Richard Nixon during the Watergate scandal.

Fr. Cornell was born on Dec. 16, 1919, in Gladstone, Mich., to Ralph and Veronica (Sullivan) Cornell. In 1928, the family moved to Green Bay where Robert became a member of St. Francis Xavier Cathedral parish. He attended Cathedral Junior High School, was active in parish affairs and, in 1937, was named the outstanding Catholic Boy of Green Bay.

He attended St. Norbert High School and received baccalaureate degrees in philosophy and sociology from St. Norbert College in June, 1941. He was awarded a master’s (1945) and a doctorate in history (1957) – both from Catholic University.

For 20 years, Fr. Cornell assisted on weekends at Corpus Christi Parish in Sturgeon Bay where he directed activities for the youth of the area, especially rock concerts with nationally famous entertainers. Later, he handled country and rock shows in Green Bay with proceeds used for scholarships at St. Norbert College.

He is the author of the standard work on the role of Theodore Roosevelt in the great anthracite coal strike of 1902 and of his own political memoirs (“Is There a Priest in the House?”) as well as numerous articles on historical and educational topics for encyclopedias and magazines. He co-authored a book on the history of St. Norbert College as part of the Centennial celebration in 1998.

While in Congress, Fr. Cornell had a strong pro-life stance.

“I always voted consistently for the strongest form of the Hyde Amendment to forbid federal funds for abortion no matter what was involved,” he told The Compass in 2007. “One of the arguments on the floor was ‘If someone was raped the abortion was justified’ and I couldn’t see that. It was a human being right from the very beginning, regardless of how the baby was conceived.”

He is survived by the Norbertine community; a niece, Patti (Cornell) Heil of Centennial, Colo.; a nephew, William Cornell of Arlington, Va.; and several cousins. His parents and his brother, Paul, preceded him in death.

The Mass of Christian Burial was to be held in the Abbey Church on Thursday, May 14, at 4:30 p.m., with Abbot Gary J. Neville presiding and Norbertine Fr. Alfred McBride serving as homilist. Burial was to follow in the St. Norbert Abbey Cemetery.