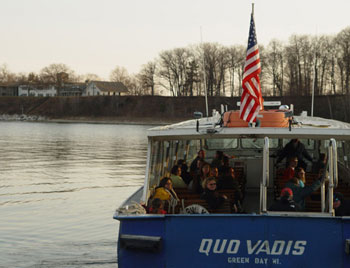 “It is the best-kept secret in Door County,” said Donna Thenell, a Holy Name volunteer and trustee board member. “It’s such a gem. (With) the solitude of the setting and the beauty of the island, it’s probably one of the most beautiful settings for a retreat.”

Throughout the summer months, Holy Name Retreat House facilitates a wide variety of retreats. Some are specifically for men or women, while others are mixed. Silent retreats are a Holy Name specialty.

According to Thenell, what Holy Name Retreat House offers can be matched by no other.

Taking in the scenic Door County views from the water, retreatants and many islanders arrive at the shores of Chambers Island on the diocesan passenger vessel, the Quo Vadis.

Besides having five to seven meals and lodging provided for them, those on retreat can utilize the canoes and rowboats on the inland island lake, the many hiking trails and even tour the historic Chambers Island lighthouse.

“There is a tremendous spirituality with all of it,” Thenell said.

“There’s no other place in Door County like it,” said John Thenell, Donna Thenell’s husband. “Because of the limited access, the island has changed very little since 1920.”

The Thenells, who were born and raised in Sturgeon Bay, have resided in their island cottage for more than 50 summers. It is a sanctuary for their family and friends. The Thenell family has a very close relationship with Holy Name Retreat House.

John served as a co-captain of the Quo Vadis for 17 years. In volunteering at the retreat house, John and Donna have helped with everything from hospitality and serving food to maintenance.

The Thenell family feels passionately about the retreat house as they’ve known it since its conception, and seen it grow. They attribute the beauty of the retreat house to the dedication of the volunteers who invested their hard work, prayers and money into it.

Lead by a Catholic priest, Fr. John Muller, and attended by 25 other men, the first retreat was held on the grounds of Holy Name Retreat House on August 3, 1951. Since then, thousands have grown deeper in their faith as the retreat house continued to expand.

Writer Linda Adams of the Door County Advocate marked the 35th anniversary of Holy Name’s founding in a two-part series on the retreat house. According to Adams, between the years 1951 and 1986 over 35,000 participants experienced a retreat there.

In recent years, Holy Name Retreat House has faced financial challenges. According to Mark Letter, chairman of the Holy Name trustees and active member of the retreat house board of directors, these difficulties are due to a steady decline in retreat registrations. Following Bishop Ricken’s suggestion, Letter and 13 other volunteers, religious and lay people, formed a committee to resurrect the struggling retreat house. Having retreat directors, business owners and other professionals on the committee, they are addressing the problems at many angles.

“We’re looking at what people are looking for on a retreat,” said Letter.

The committee believes that expanding retreat formats as well as increased advertising will both benefit the retreat house. While looking at increasing the variety of retreats to bring in new retreatants, Holy Name will still continue to offer retreats similar to those in previous years.

“It (Holy Name) has evolved over the years with over 50 years and millions of volunteer hours,” said John Thenell.

Josh Priniski is a senior philosophy major at UW-Oshkosh and has made five college work retreats with Holy Name Retreat House.

Among his favorite elements of the island are the wilderness aspects, the lake and the beautiful surrounding waters, but having a Catholic place for him there as well as people of the same faith really makes the experience for him.

“The community aspects are really great,” Priniski said. “When you get a random group of people together, there are certain barriers you have to work through normally that you don’t have to when you’re on a retreat. [On retreat] we’re at different points in our faith, but in sharing similar beliefs, the conversations ensue. We get that time to talk.”

“You meet people where they’re at on these retreats, whether they’re heavy into theology or big into fishing,” said John.

John and Donna Thenell are excited for what the new summer will bring for Holy Name Retreat House. They challenge the people in the Diocese of Green Bay to take the next step in their faith and try a retreat on Chambers Island. “This is their retreat house,” Donna said. “They can experience the peace and tranquility.”

“I encourage anyone who would have some days free to consider making a retreat or to join one of the already scheduled retreats to enhance your spiritual life and to get back to nature,” said Bishop Ricken.