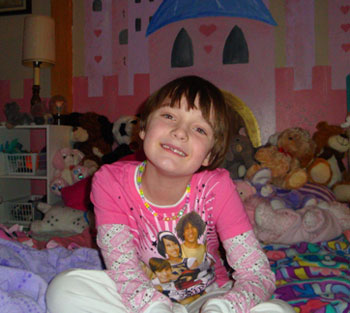 Tiffany Dombrowski is pictured in her new bedroom that was remodeled and decorated by volunteers while she was at Children’s Hospital in Milwaukee. (Photo courtesy of the Dombrowski family | For The Compass)

“It’s amazing,” said Rita Steffen, principal at St. Gregory School, where Tiffany is a second grader. “Without God, it could not have happened. From her initial condition to where she is now, there is no way to explain it, short of a miracle.”

Not only did Tiffany survive the ordeal, she returned home March 23, after spending five weeks at Children’s Hospital in Milwaukee. Today, Tiffany, who undergoes occupational and speech therapy four times a week at Sheboygan Memorial Hospital, shows no physical signs of her trauma. Her parents, Michael and Jennifer, members of St. Gregory Parish, give thanks to God for their daughter’s survival and continued recovery, and to the community that reached out to them in their time of need.

“There is no doubt that God answered our prayers and has given Tiffany this second chance at life,” said Michael Dombrowski. “My responsibility as a witness is to make sure that everyone she meets knows about this miracle and that God is always in charge.”

According to Dombrowski, the ordeal strengthened his family’s faith, helped them to accept the generosity of others and taught them about forgiveness.

The accident happened on Valentine’s Day. Following a Friday sleep-over at the Kleinhans, Tiffany joined Savannah and Danial on a trip to nearby Lake Winnebago, where vehicles traveling the ice-covered lake are common during the ice fishing season. Around noon, Kleinhans’ silver Ford pickup plunged through the ice.

After learning about the mishap, Jennifer and Michael drove to Theda Clark Medical Center in Neenah, where Tiffany was first transported. She was later taken by Flight for Life to Milwaukee.

Dombrowski said he had worked late the night before and when the accident happened, was not aware that his daughter was at the lake. The shock of learning that she was in the submerged truck initially brought feelings of bitterness.

However, after flying over the lake in the Flight for Life helicopter and seeing all of the cars and fishing shacks, Dombrowski said he could not blame his friend and neighbor, Kleinhans.

“I said, ‘I have got to forgive this man,’ because anyone who would go out on that lake, you see all of these people and you think it must be safe,” said Dombrowski. “So that was when the forgiveness really set in. I didn’t know any details at that time. So I was giving myself over to forgiveness.”

The Dombrowskis had moved to St. Nazianz from Milwaukee in August 2005, seeking a quieter lifestyle for their growing family, which today includes David, 13, Nathaniel, 9, Tiffany, Colin, 6, and Isabel, 16 months. “Dan was the first one to greet us,” said Michael. “He was our welcome wagon.”

Losing Dan and Savannah has been hard, said Michael, but their loss has been softened by the outreach the Kleinhans family has offered to Tiffany.

“Tiffany is a connection that they have (with Savannah), so they would like to somehow be involved in Tiffany’s life as she grows up,” he said. “I think that is really something to be said for that family.”

The Dombrowskis said the fear of losing Tiffany was more poignant because Jennifer had miscarried their fifth child in August 2005. Earlier that year, Michael’s mother, Donna, whom he said passed along to him her strong Catholic faith, died.

It was only after arriving at the Neenah hospital, some two hours after the initial phone call, that they learned Tiffany was still alive. “We expected the worst,” said Jennifer. “We just wanted her alive. We didn’t care what condition she was in.”

“In my mind, I felt she was lost. I felt she was probably floating somewhere under the ice,” said Michael. “I accepted that I might never see her again, but I appealed to God to help them find her body. That was my prayer to God, to get more time with her.”

When Michael boarded the helicopter with Tiffany for the 40-minute journey to Milwaukee, all he could do was pray, he said.

“My prayer to God in the helicopter was, ‘I turn my entire life over to you, God. There’s nothing I can do to save my daughter and it’s in your power.’”

After arriving at Children’s Hospital, Tiffany remained in intensive care for nine days. She was in an induced coma for several days, but, within one month, began talking and walking.

Her dramatic recovery astonished the doctors, said Dombrowski. “Based on specific blood tests that were taken initially it seemed impossible that she would ever have had the chances she has now,” he wrote March 6 in Tiffany’s CaringBridge Web site (go to www.caringbridge.org and type in princesstiffany), which kept relatives and friends updated daily on her status. “(Doctors) expected severe brain damage and very limited function, based on the amount of time she was under water and without oxygen.”

All during her stay at Children’s Hospital, Tiffany had a legion of followers praying for her recovery. Leading the prayer campaign were Tiffany’s classmates at St. Gregory, as well as the school and parish community.

According to principal Steffen, staff had called each school family the weekend of the accident. Parents were asked to speak with their children about the incident and counselors from Catholic Charities were on hand that Monday after the accident.

Students, staff and parents created a prayer chain, which first hung in Tiffany’s hospital room and is now in her bedroom. A poster in the school cafeteria allowed students to add prayers for Tiffany while she was in the hospital.

A special prayer for Tiffany’s recovery was added to a display in the school gym and recited every day by the students. It reads: “Lord, look upon Tiffany with eyes of mercy. May your healing hand rest upon her. May your life-giving powers flow into every cell of her body and into the depths of her soul, cleansing, purifying, restoring her to wholeness and strength for service in your kingdom. Amen.”

Michael said the school is still reciting the prayer for his daughter’s recovery “because they know Tiffany’s not back 100 percent. They’re not going to stop until God has finished the miracle.”

As Tiffany continues to regain her physical health, Dombrowski said no one knows how her cognitive development will progress. “If anything we noticed it’s probably related to short-term memory,” he said.