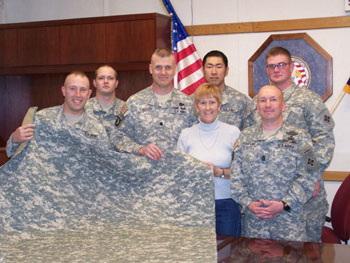 Debbie Kelly of St. Edward Parish in Mackville is pictured with her son Patrick, far left, and his Army unit as they display a camouflage quilt. Kelly presented a quilt to each of the soldiers, who are headed to Afghanistan on May 20. (Courtesy of Debbie Kelly | For The Compass)

“It was a request from Patrick,” she said. “He called and said he was going to be stationed somewhere where it was very cold and would I make him a quilt that matched his uniform that he could put over his sleeping bag. That’s how it started out. Then before you know it, he said, ‘Since you’re making one for me, can you make one for my guys?’ Then I got another call and he said, ‘Since you’re making those, can you make them for the officers as well?’ That’s how we got to six.”

The quilts are all similar but each will be personalized. “The front is camouflage,” noted Kelly. “The material, called digital camouflage, is the same material as their uniforms. The back is a dark khaki color so it won’t show the dirt. Quilted right in the middle of each quilt is their rank, their name and their unit. On the back I put a label that had a message from my son to each person, with their nicknames and all kinds of little things. And I put a message from me and my husband. I left a space on the bottom of the label for one of their family members to write them a message that they could take with them.”

According to Kelly, her message was, “This quilt was made with gratitude for what you do for this country and the sacrifices you and your family make to protect us. Know that our thoughts and prayers will be with you daily until you return safely home.”

“It did take me a while to make them; it was not an overnight project,” she said. “I had to call all my customers and I must say they were all wonderful about waiting for the things they had so I could put these in front. They all said, ‘Are you kidding? You go ahead, however long it takes.'”

When word got out about the quilts, one of the recipients, a lieutenant colonel, invited Kelly to the base in Colorado to present them to the group as a unit.

“They were all very excited and very appreciative,” said Kelly. “When we went there, the lieutenant colonel gave me a gold pin from the unit that only the women of the unit get, which I thought was pretty nice. He also gave my husband a gold coin from the unit listing all of the wars that this unit has been in, starting with World War II. They don’t give very many of them out. We thought that was pretty cool too.”

The original intent of the quilt project was to keep the soldiers warm, but as Kelly was making them, she thought about what a great way for the soldiers to keep their families with them when they are so far from home.

“That’s why I left the space on the labels for their wives to leave a message or their children to draw them a picture, or whatever they wanted to take with them, so that every night when they went to bed they could look at it and have something.”