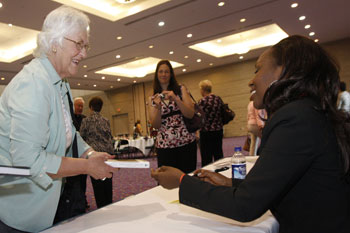 Yvonne De Temple of Prince of Peace Parish in Bellevue receives an autographed CD from Immaculée Ilibagiza who spoke at the KI Convention Center in Green Bay May 7. (Rick Evans | For The Compass)

Ilibagiza spoke at the fifth annual Ladies Lunch as part of Green Bay National Day of Prayer events, May 7 at the KI Convention Center. She also shared her story at St. Pius X Parish in Appleton. During the genocide, Ilibagiza and seven other women spent 91 days hiding in a small bathroom of a local pastor’s home.

“Every hour was so long, like an eternity,” she said. “You keep asking yourself, ‘Why am I here? How could this happen?’ I could see if they didn’t know me, but these are my neighbors. This is where I grew up.”

Anger and resentment consumed Ilibagiza, a Catholic. She admits that she felt a desire to kill the Hutu extremists who were traveling from house to house looking for Tutsis to murder. Ilibagiza, a university student at the time, was home for Easter when the genocide began. Her father, a teacher, gave her a rosary and sent her into hiding. She eventually surrendered to God.

“The remedy of fear is trust in God, prayer,” said Ilibagiza. “You can ask God to help you. Don’t give up. He is almighty, and almighty means he can do anything. And this is anything.”

While in hiding, Ilibagiza read the Bible and prayed the rosary. She also taught herself English through the use of a French/English dictionary.

“Any time I would see the word ‘forgive,’ in the Bible, I would close the page,” she said. “I didn’t want to forgive. I didn’t know how to forgive.”

Hutu gangs searched the pastor’s house. Ilibagiza prayed that her life would be spared.

“I prayed to God,” she said. “If you exist, please don’t let the killers find us today. I will surely know you exist no matter what happens to me. When I would pray, things would be calm.”

The Hutus never opened the bathroom door. Ilibagiza emerged from hiding to discover that nearly her entire family, including her parents, grandparents and two of her brothers, were killed.

She eventually found forgiveness in her heart through her faith.

“The people who are killing don’t know the consequences that will come to them,” she said. “They are so blinded by anger. I felt bad for them and their families. I can think of them as human beings who are confused and completely wrong. The hate was gone. I felt so much light.”

Ilibagiza weighed only 65 pounds when she left the pastor’s home. A French physician warned her that she would suffer from various illnesses and likely would not survive. She thought otherwise.

Ilibagiza secured a job with the United Nations. In 1998, she immigrated to the United States. Eight years later, she released her first book, “Left to Tell,” the story of her survival, which became a New York Times best seller. She has written two other books, produced spiritual and music CDs and a documentary. A film about her life is in the works. Ilibagiza feels blessed to be able to inspire others through her survival.

“I have heard people tell me they have been angry, but have been able to find that peace within through the telling of my story through my book,” she said. “I’m happy when people find that joy and overcome the bitterness.”

She shared advice for those struggling with the economy or other problems in their lives.

“It is not time to fear more, it is time to pray more,” she said. “If things are not working out, ask (God) more. I am worried about us praying more.”

Although Ilibagiza now lives in Manhattan, her homeland is always close to her heart. She has formed the Left to Tell Foundation to benefit orphans in Rwanda. Her close friend, Amy Polasky of Ashwaubenon, serves on the board of directors.

A video presentation about the Rwanda genocide preceded Ilibagiza’s talk. She summarized her experience as a personal faith journey.

“I hid in this little bathroom for 91 days,” she said, “and they didn’t find me, but I found myself.”