It’s been a busy Friday at the Catholic Press Association convention in Anaheim. Most of my convention updates have been posted on our Twitter account. I have found Twitter to be  a great tool for instant updates. The information bursts that can be posted on Twitter in 140 characters or less make live reporting much easier than traditional blogging.

A lot of information at this convention has been about new social media. Yesterday, Msgr. Paul Tighe, an Irish priest who works at the Vatican, discussed the Vatican’s new efforts to become involved in social media, e.g. Twitter, YouTube and Facebook. The pope’s 2009 World Youth Day message is on social media.

What is interesting about social media is that a lot of Catholic journalists here in Anaheim have jumped on board and are taking advantage of it. If you visit our Twitter page, you’ll see folks like @catholicnewssvc, @goingtoCPA2009, @thecatholicsun, and @deadline_guy twittering away, offering live updates to followers across the country. We actually got together today for a photo of Catholic Twitterers. I hope to post the photo here later today.

So like it or not, this is where the church is going to evangelize, bringing the message of Christ to all four corners of the world via the electronic medium. It’s our responsibility to take these new technologies and use them wisely.

As I write this I’m attending a workshop "Social media marketing: Powering Your Catholic Brand via Web. Go to our Twitter page for updates on this workshop. 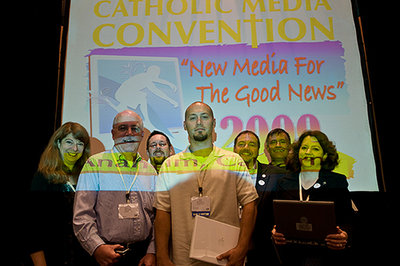