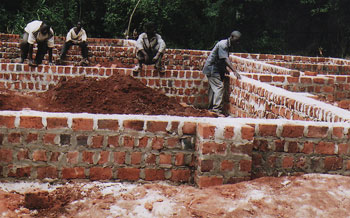 The foundation and some of the side walls of St. Mary Church in Kiwanguzi, Uganda, the home village of Fr. Celestine Byekwaso, were in place at the time construction was halted in November of 2007. Thanks to the fund-raising efforts of Fr. Byekwaso’s past and current parish communities, construction has resumed. The roofing stage of the project is under way. The church is expected to be finished in 2010.(Submitted photo)

Fr. Byekwaso is a priest of the Kasaala-Luweero Diocese in southern Uganda. In 2005, immediately following the completion of a master’s degree in liturgical studies at the University of St. Mary of the Lake/ Mundelein Seminary in Mundelein, Ill., Fr. Byekwaso was asked to serve in the Green Bay Diocese. He was assigned as associate pastor of the Tri-Parish of St. John-Sacred Heart, Sherwood; St. Mary, Hilbert; and St. Mary, Stockbridge.

In the summer of 2007, Fr. Byekwaso celebrated 25 years as a priest. He donated all the monetary gifts he received to begin construction of the church.

“He celebrated his silver jubilee here and it was a really awesome event,” said Loren Birkenmeier of St. Mary, Stockbridge. “He had it outside because that’s where they would have had it in Uganda.”

Even though he left shortly after his jubilee celebration for his new assignment, Fr. Byekwaso continued to provide updates on the building project to the Tri-Parish.

“The funds were depleted so construction stopped in November of 2007,” said Birkenmeier. “He’s a good friend of the people here, so they wanted to help.”

Birkenmeier explained that the Tri-Parish community raised money to dig a well in Uganda.

In the fall of 2008, a parishioner in Stockbridge introduced an idea to raise funds for the completion of the church. A raffle was approved by the parish pastoral and finance councils, Fr. Philip Dinh-Van-Thiep, pastor, and the diocese. It was officially announced in February of 2009 at the Tri-Parish and at St. Anne.

Birkenmeier admits that he had initial concerns about the raffle, which featured 300 tickets sold for $100 each.

Tickets were sold at six church locations after weekend Masses. Cash prizes ranged from $1,000 to $100. Raffle participants demonstrated that their interest was not about winning money, but about supporting a good cause, said Birkenmeier.

“Sacred Heart-St. John had a fish fry and used all the profits to buy raffle tickets,” he said. “They purchased 33 tickets. One of those tickets won the $1,000 prize. They gave it to Fr. Celestine, so they actually contributed $4,300.”

The Fox Valley Mission Group won the $750 prize and also donated it to the church project. The raffle raised nearly $24,000.

“I am very thankful,” said Fr. Byekwaso. “It was very kind of the people who I believe are open to supporting where and when they are able.”

The foundation and some of the side walls were in place when construction was halted. The project has now reached the roofing stage, said Fr. Byekwaso, but he said it will take some time.

“Roofing back home is not like roofing here,” he said. “They must bring in the timber and cut it on-site. It is all done manually.”

More funding is also needed, he added. The $35,000 budget is no longer enough.

“The budget was in place before the work came to a standstill,” he said. “That was before the financial crisis. Prices have increased. For example, if a bag of cement in Uganda was $10 it is now twice that amount.”

If Fr. Byekwaso can pinpoint a completion date for the church he plans to be there for the first Mass. The new worship space can serve 400 people. Plans about making St. Mary a sister parish of the Tri-Parish have been discussed, said Birkenmeier.

Support in Uganda is needed in other areas, added Fr. Byekwaso. Several young men are interested in becoming priests, but their families cannot afford their education.

“One of my dreams is to find sponsors,” he said, “even if someone can sponsor a seminarian for one year.”

He also hopes to support the expansion of St. Mary School. Half of the students have classes under trees because of a lack of space, so more classrooms are needed.