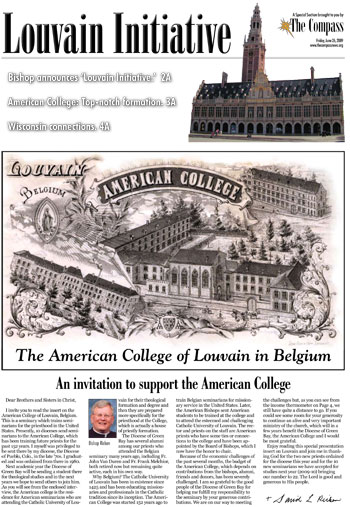 “The (deficit) that we have was really a perfect storm of the economic downturn and the downturn of the U.S. dollar, and has made it very difficult for the college for this fiscal year,” Bishop Ricken told The Compass. “So we were left with a deficit of $250,000.”

The Louvain Initiative
As chairman of the Committee for The American College, Bishop Ricken acknowledged that “a great deal of this responsibility (for fund-raising) has fallen on my shoulders.” He began what he is calling the “Louvain Initiative” last December and already has raised more than half of the $250,000.

“I moved to Green Bay having almost no knowledge of the diocese at all. When I came, I found out there were six or seven Belgian parishes that still identify themselves as such,” he said. “So when we were faced with this financial crisis at the college … I went to some of the Belgian parishes every weekend during Lent. I asked them for their assistance and they were generous.” Private donors in the diocese also contributed, he said, bringing in about $90,000 in the diocese.

Additionally, another $76,000 was raised by Bishop Ricken outside of the diocese, bringing the total amount to approximately $166,000.

Seeking support from diocese
Bishop Ricken is taking the “Louvain Initiative” to Catholics in the Green Bay Diocese, as well as to U.S. bishops.
“I’m hoping that this next fiscal year, the bishops will send more students (to the American College) and that they will be more generous to the college,” he said. In an effort to promote these causes, Bishop Ricken appealed to his fellow bishops last week in an executive session at the U.S. Conference of Catholic Bishops’ spring meeting in San Antonio, Texas.

He told The Compass that he is confident the bishops would be receptive to his appeal.

“The college got a very high evaluation by the Vatican’s seminary visitation team about three years ago,” he said. “Then the Vatican Congregation for Catholic Education said that the bishops ought to preserve this college and that I, as the chairman, needed to be pro-active in getting the job done. So that’s what I’m doing – taking my orders from above.”

Before making his appeal to the USCCB, Bishop Ricken said it was important to lead by example. Not only has he raised money locally for the college, he plans to send a seminarian to Louvain next fall. (The diocese has not had a seminarian studying at Louvain since 1991.)

Seminarian to attend college
This coming academic year, the diocese will send a new seminarian to Louvain, Alvan Amadi, who comes from Nigeria. “He heard about us through the (diocesan Web site),” said Bishop Ricken. “When I was in Louvain last February I met him and invited him to apply as a seminarian for the diocese.”

As an American College alumnus, Bishop Ricken remembers the classes being academically demanding and the lively and joyful community spirit that existed among seminarians. “What I enjoyed also was being in Europe and experiencing other cultures. It’s a great opportunity to view your country from afar; her struggles and difficulties, but also the great gifts we have in this country.”
He said the college has a reputation for forming good pastors.

“The seminarians who come from this environment are flexible, creative and usually very hard workers,” he said. “They also have contributed to the intellectual life of the country. There are others who are chaplains at university campuses; there are some who work at chancery offices and most of them are good, solid parish priests.”

“The college in the European system means a house of residence with a particular focus for students,” he said.

Bishop Ricken has heard this argument, but sees the college as a valuable asset to the Catholic Church in the United States.
“For one thing, it’s in northern Europe and it’s centrally located,” he said. “One gets a view of many different countries and cultures. It’s actually one year older than North American College in Rome.

The university uses the historical method in its approach to teaching, added Bishop Ricken.

“Every course they teach walks you through the history of that particular discipline. So you don’t approach anything without first getting the historical perspective,” he said. “So you understand the reason for the church’s teaching and our theological tradition.”
He said bishops like this approach to teaching, “but they are mainly concerned that there are not enough seminarians to go around.”

Bishop Ricken said he hopes to have the $250,000 raised by September. His next goal is to help the seminary establish long-term funding sources.

“The idea is that eventually the college will hire a professional development director and work with the alumni, work with the bishops and donors, in finding ways to support the college, which they have never really done,” he said. “They were always so strapped for money to get all of the programs paid for that they never took time to really develop that aspect of the institution’s life.”

Other initiatives planned
Bishop Ricken is working with Deacon Mike Vincent to create other funding sources for the seminary, which would help underwrite critical repairs at the facility. According to Deacon Vincent, who joined Bishop Ricken last February in Belgium, the seminary has peeling paint, broken tile, leaky plumbing and exposed electrical wiring that need immediate attention.

• A Mass celebrated by Bishop Ricken followed by a dinner featuring Belgian specialties. This event will be held at St. Francis Xavier Cathedral, but no date has been set.

• A retreat/work experience in Louvain. Deacon Vincent envisions a pilgrimage to Louvain led by Bishop Ricken. In addition to opportunities for prayer, he said a work crew could make needed repairs at the seminary. The retreat is in the planning stages.
Catholics are also invited to donate funds to the Louvain Initiative using a form that is published on the following page.

“We are going to need a development plan” in the future, Bishop Ricken acknowledged. “But God willing, we are going to get the rest of this money to take care of the bills.”