Inside and out, Anderson serves his parish 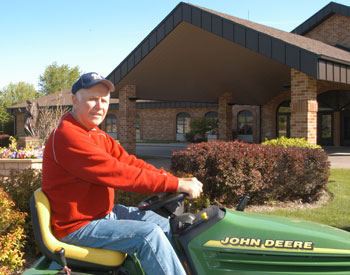 “We call ourselves the Ancient Order of Grandpas,” Anderson said. “It’s something we enjoy doing, working together. When we’re doing this, we’re talking sports, talking this and that, having a cup of coffee and enjoying our togetherness with people. The camaraderie is just as important as giving back.

“The more people you can get involved, we can save the parish a lot of money. We call on them, and they’re there to help,” Anderson said. “We can round up four to seven guys in an hour’s time if we have to.”

He said the parish offered fish fries on the five Fridays during Lent, and that took 250 people on a Friday night to serve an average of 1,000 visitors.

Church has always been an important part of Anderson’s life. He was born and raised in Iron River, Mich. He lived in Kaukauna while he worked in metal cutting at Giddings and Lewis, and attended Holy Cross Parish. He moved to Oshkosh in 1987 when his job was transferred to Fond du Lac.

“When we came to Oshkosh, coming to church was a good way to meet people,” he said. “I started doing the lawn in 1995, and I still do it. I take care of the lawn and everything outside. It’s something I enjoy doing.”

When his children were young, Anderson said, he didn’t have as much time to volunteer as he does now. He helped out with their sporting and recreation programs.

His volunteering has increased as he has more time to do so. “I’m part-time retired and will do contract work as needed,” he said.

His family also has learned the lessons of giving back: His wife, Pamela, is a volunteer at Mercy Medical Center in Oshkosh.

“Yes,” he says with a chuckle. “We’re Tommy Lee Anderson and Pamela Anderson.”

Their daughter, Lisa Nortman, does the finances for St. Pius Parish in Appleton. Her children attend St. Joseph School, St. Pius School and Xavier High School in Appleton. His son, Kurt, is a salesman for Jonas in Green Bay and is involved with his children’s sports. He and his family belong to St. Jude Parish.

Anderson sees patience and faith as the cornerstone of his life, and he sees volunteering as a way to pay back for what he has received.

“We’ve had some health issues in our family,” he said. “In six months’ time, I lost a brother to a heart attack out of the clear blue sky and my wife had cancer. We both lost our jobs. Then my wife had cancer again. With our faith and patience, we got through it.

“It’s one day at a time; you’ve got to have patience. There’s a light at the end of the tunnel. It’s flickering sometimes, but with patience and faith you can make it,” he added. “I have my family. We have our health. We’re very lucky. Someone had to be watching over us.”

Anderson spent April in Arizona watching baseball spring training. He and Pamela also have taken two pilgrimages, one to Italy in 2004 with Fr. Dan Felton and one to Eastern Europe last year.

But he’s back in time to cut the grass at St. Raphael’s.

“It is the first impression that tells you how things are inside,” he said. “I like to keep the place very nice-looking outside. I don’t get any pay for it – I do it because I want to. When I’m on that tractor riding, it’s a good time to reflect. This time of year, I have to do it twice a week. Nobody tells me to go. I go when I want. I’ve made a commitment, and I do it.”