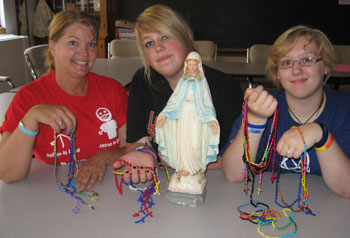 Tanya Schreiber, left, youth minister at St. John, St. Mary and St. Patrick parishes in Menasha, Katie Fischer and Stephanie Brandt, members of St. John Parish, show some of the rosaries they have helped to make and sell. (Amanda Lauer | For The Compass)

“They have an interactive village every year at the conference and this year as part of that village they had the rosary experience where you could learn how to tie rosaries with colorful string,” explained Schreiber. “As we have been praying the rosary, the kids were finding themselves more and more involved in it and when we saw (the demonstration), we got excited and they all sat down and started trying this.”

After the conference the group found they could buy the nylon string to create the rosaries at Hobby Lobby. “We went on a rampage of making rosaries, almost a contest to see who could make the most,” recalled Schreiber.

As the teens work, they pray the rosary as well. “We’ve made that commitment to ourselves, whether we do it at home or wherever we are, we’re saying Hail Marys for each bead that we’re tying. We think that prayer has perpetuated the whole thing,” noted Schreiber.

The rosaries are made completely out of string. “There aren’t beads; it’s all knotted so the knots are the actual decades. Even the cross is a series of knots at the end. They’re very cool.”

Originally the rosaries were offered for sale in the offices of the Menasha parishes. “As people come in they see our rosaries and they pick a couple up. Some days we’ll have 30 in our offices and they’ll all be gone and we have to replenish the 30,” said Schreiber. “It’s word of mouth. It keeps growing.”

The group gives away rosaries, too. “We’ll give them to a sister, we’ll give them to priests. We explain that this is from our youth group and we’re praying for them. We give many away, as the spirit guides us.”

The two adult youth leaders and six students are involved with this project – Stephanie Brandt and Katie Fischer from St. John Parish in Menasha, Will Belmont from St. Mary Parish in Menasha, Connor Schlaak from St. Jude Parish in Oshkosh, and Sarah and Claire Patz from Ss. Peter and Paul Parish in Green Bay. Among them they’ve made several hundred rosaries.

Brandt is a teen leader for the Menasha parishes’ middle school youth program. She explained why this project is so important. “We have no money for our youth ministry program at this point. All the kids that go have to pay for their own things. The teen leaders don’t want the middle schoolers to go through that. So we took it upon ourselves to do (the rosaries) and make money for our youth ministry program.”

Debbie Spielbauer, the faith formation coordinator at St. John Parish in Menasha, has bought rosaries from the group. “My mother-in-law has cancer and she says a daily rosary or two or three or six or whatever the spirit moves her to say,” said Spielbauer. “I’ve been her rosary mender over the years because she falls asleep with the rosary in her hands. When our youth minister and some of her students started making these knotted rosaries, I said, ‘That’s exactly what my mother-in-law needs,’ because she can’t break it when she rolls over in her sleep.”

This is a gratifying mission for Schreiber.

“To see the passion the kids have for the prayer and they truly have such a devotion to Mary. They thought that this was something they had to do and that they wanted people to know that prayer and they want to spread that prayer. They’re willing to teach it to anyone, even if they’re not Catholic. We’ve had people buy them from us that aren’t Catholic and we think that is amazing.”