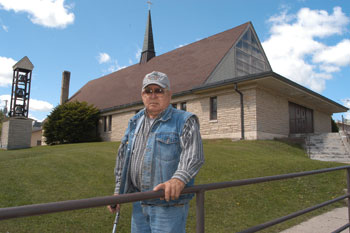 John Newton stands outside St. Anthony Church in Neopit. Newton spearheaded a campaign to restore the church’s three bells, which are named for Pius X, Mary and Blessed Kateri Tekawitha, the Lily of the Mohawks. The bells were purchased from an Illinois church in 1963. (Dick Meyer | For The Compass)

“The celebration will keep going from June 14,” said John Newton, parish council president. “On the day of the event, a lot of people are coming. It’ll be like a powwow. Everybody comes home, even if they’ve moved out to different state. With a powwow, they come home. I expect it’s going to be the same. People have a lot of memories to share.”

Those memories, thanks to the Menominee tradition of honoring history and their elders, will be part of the day with stories dating back to the founding of the parish by Bishop Joseph Fox in 1909. The new parish was staffed by the Franciscan Fathers who were serving in Keshena. The first pastor was Franciscan Fr. Engelhard Troesken, who remained a frequent visitor until his died in 1966.

St. Anthony is only a year younger than the village of Neopit, which was founded in 1908 after a tornado had leveled the forest in the area which overlooks the west branch of the Wolf River. A lumber mill was quickly built on the site – now part of the Menominee Tribal Enterprises – and the men who came to work there needed church services. The first Mass was held in the lobby of the new Government Hotel on July 4, 1909.

The first church was built soon after – mostly by labor donated by parish members – and dedicated on Nov. 21, 1909. Some of the funds ($1,000) to build it were donated by Pope Pius X. A shrine to him is located inside the present church and one of the three bells in the tower is named for him. (The other two are named for Mary and Blessed Kateri Tekawitha.)

“With that first church, you had to do it yourself,” said Newton, who was born and baptized in Neopit, though he had to move away for many years, first to attend boarding school and then to get a job.

“I heard a lot of stories about that church,” he said. “How all the men in town built it, and the lumber came from the mill, which was new at the time. Everybody was just starting out here. There were only black dirt roads.”

Mary Fish, a member since she was married at St. Anthony in 1947, said she has always been impressed by the dedication of the parish members.

“One thing that really stuck in my mind,” said Fish, “from when I first went to the old church, was my husband’s aunt. Electa Lawe was the organ player and her husband, Hank, rang the church bells. Every Sunday, he was there ringing the bells. He did it until he could no longer stand on his feet.”

Community spirit
That sort of dedication continues, according to Fr. Dave Kiefer, pastor for the last 18 years.

“There’s a great community spirit here,” he said, “of people coming together to get things done and being willing to add what they can to any project.”

As an example, he said that each spring the parish hosts an appreciation dinner for anyone who has helped out during the past year.

“The numbers of invitations to people who have helped in the year runs to 200.” Which, he added, includes almost everyone who belongs to St. Anthony.

Volunteering for the parish is a tradition for most families. When the present church needed to be built in 1959, most of the work was again done by parish members. While the church was estimated to be valued at over $150,000 at the time, it actually cost about $60,000 because of donated labor.

The lumber and stone even came from the reservation land. Men would donate an average of one day a week in labor, often working at night after a shift at the mill or cutting trees in the forest. The foundation stones were washed by hand and women helped with painting and finishing the wood pews, as well as cooking. By the time it was completed, the church held 25 different types of wood, representing all the species found in the Menominee Forest.

Ties between parish, tribe
There are strong ties between the parish and the Menominee Tribe. Newton points out that “basically 90 percent of the Indian tribal members are going to church in Neopit.”

He said that even those who, like him, live in Keshena and could attend St. Michael Church there, choose to go home to St. Anthony.

“It’s like a procession going up to Neopit on Sunday morning. The tribal members travel up there because the parish allows our culture to be part of the church.”

Those cultural elements include the men’s drumming circle at events like funerals and anniversaries, along with tribal dancers for bigger celebrations. Smudging with cedar smoke is part of services and those who are confirmed receive an eagle feather, which is of sacred value to the tribe.

“The tribe and the church are very close together,” said Newton. “All the tribal legislators are members of the church. So anything that comes up, any topic, we got the people that can handle it. They try to work together.”

One of those projects is the community center. This joint venture of the parish and the tribe was built in 2000 on property that once housed the convent. It is here that community events are held, classes taught, wakes held and feasts cooked.

Charlotte Wagner, who directs religious education at the parish, said the community center is representative of the parish.
“It’s a place where everybody feels welcome,” she said. “That’s part of our parish mission statement: ‘This is where you belong forever.’ The Menominees, when they move to big cities, still claim St. Anthony as home.”

Known around diocese
Many parishes across the diocese know St. Anthony Parish. The parish has traditionally been the poorest in the diocese because Menominee County normally has high unemployment rates. Many parishes have adopted the Neopit parish and send food, money and clothing.

Donna Haack manages the parish food pantry, which is open on weekdays. She says the pantry serves about 37 families each month, roughly 20 percent of the parish, but also includes people who come from Keshena.

Haack, who is herself on partial unemployment after 20 years of work with the county, said the pantry runs on faith. “It seems like we get down to almost nothing in the pantry and then we get a nice donation.”

“We’ve had several parishes throughout the diocese and as far away as Milton who either make a monthly donation or provide Christmas things, baskets and gifts for our people,” said Fr. Kiefer. “So many have sent food packages and stuff like this. We just had a van full of food come up this week. It’s particularly a blessing at Christmas time.”

The parish members are equally generous, cleaning, repairing and even chopping wood to heat the parish plant in winter. Haack said parish and pantry needs are listed in the weekly bulletin and “our people will bring in cases of soap, or dish soap and laundry detergent.”

He said St. Anthony strives to be a community of faith and family, sharing what they have and treasuring their stories. The stories shared on June 14 will be compiled into a parish book. That way, future generations will know what Mary Fish, who turns 80 this year, already knows:

“I believe that the Neopit parish people were always a strong bunch of people. They were dedicated, always. All the members were always strong in whatever they did. It was always together. They helped each other. I’ve found a lot of strength through the people in Neopit. I believe it made me the way I am.”