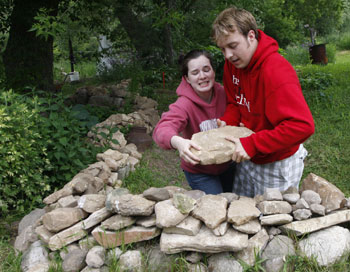 Lisa Kelley and Christopher La Fleche from St. Peter Marian High School in Worcester, Mass., top off a stone wall at the Bridge-Between Retreat Center in Denmark. They were among five teens and two adults from Worcester, Mass., who participated in Young Neighbors in Action last week. (Rick Evans | For The Compass)

According to Sean Lansing, Young Neighbors in Action’s project coordinator, 36 service programs at 18 different locations across the United States will be offered this summer. Lansing was in Green Bay last week leading Young Neighbors’ first-ever themed week of service, which combined a look at environmental issues with Catholic social teaching.

“We’ve never done a topic-specific week like this,” Lansing said. “Our normal focus is poverty and the disenfranchised.”

The teens from four youth groups, along with their adult chaperones, stayed at Our Lady of Lourdes Church in De Pere. Their days started with morning prayer and breakfast. They then went out each day as small groups to a variety of work sites in the area. Along with the Bay Beach Wildlife Sanctuary, the teens volunteered at Baird Creek Parkway, the Oneida Organic Farm, the Bridge-Between Retreat Center in Denmark and several community gardens served by the Brown County Extension office.

After evening prayer and dinner back at Our Lady of Lourdes, the teens spent time reflecting together on their days work and tying it into their Catholic spirituality.

Several of the teens were moved by the passion with which those in charge at the work sites carried out their daily duties. “I hope that when we get older we will be equally passionate,” said Maureen Kuhl, 16, from Dubuque, Iowa.

Kuhl, who spent her week at Baird Creek, said that despite the hard toil of pulling invasive weeds at the park, it was well worth the experience. “I learned that God is everywhere and it’s important for us to get out and experience nature,” she noted.

Drawing from such teachings as the U.S. bishops’ 1991 document on the environment titled “Renewing the Earth,” Lansing said that the teens’ eyes and ears were opened in their nightly reflections to learn what the church had to say on the environment.

“The environment is a hot topic these days among the kids,” said Lansing. “One of the things we tried to do is show them that their Catholic faith has a lot to say about the environment. As Catholics, we have an ancient way of looking at the world.”

Jane Angha, director of faith formation and a youth minister at St. Bernard Parish in Appleton, served as the site coordinator for the week. She was impressed by the youths’ ability to bring the myriad of issues they confronted each day together by the end of the week.

“The kids really got it in regards to the environment and their responsibility to it,” she said. “They were able to see the seriousness of some of these situations.”

When asked if this first-ever spirituality of the environment week in Green Bay was a success, Lansing said that it went beyond his expectations. “We’ve already got it on the calendar for 2009,” he added.