Faith is at top of organist’s repertoire 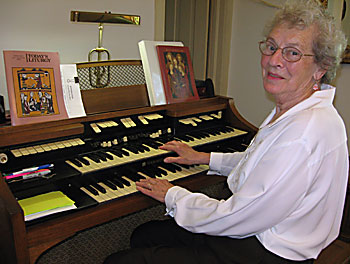 A career in music started for Schumacher when she began piano lessons at age 7. “An older lady next door to us came and said, ‘You should learn to play the piano.’ She played the organ for silent movies in Chicago. After that I got lessons from a lady from Appleton who had a master’s degree in music.”

During the Depression, Schumacher’s family moved to a farm outside of Hilbert. That was the end of formal education for Schumacher. “I only went to school through eighth grade. I would have liked to go to high school, but my family had just moved onto the farm and we were poor as church mice. I’m the oldest one of eight kids so it took a lot to make food go around.”

When World War II started, Schumacher learned the trade of electric welding and went to work at Lakeside Bridge and Steel in Milwaukee. “My cousin and two other girls and I were the first women that they hired down there. I helped make ships. We were ‘Winnie the Welder.’ My husband used to kid me that we won the war in spite of my welding skills,” said Schumacher.

The Schumachers were married in 1944 and they had four children. “I knew Gib pretty near all my life. We went to the same school and he was four years ahead of me.” The couple lives in the house that Gilbert was born and raised in. They farmed on the property until about 20 years ago.

Her career as an organist came about at the request of fellow parishioners. “They had a very old pump organ in church but nobody wanted to play it,” recalled Schumacher. “The trustees from church came out and asked me if I would play the organ so they could have some music. My dad said, ‘LaVerne, you shouldn’t do that because once you start, you can’t get out of it anymore.’ He was right and you should listen to your dad,” she noted with a laugh.

After Schumacher agreed to take over the position, a choir was formed at the church. “Easter Sunday, that’s when our group sang for the first time. Sometimes I would have to play three or four times a week and I played every Sunday. I played in a number of parishes around here. I played for weddings and funerals.”

Schumacher has tracked the songs she played each Mass for years. Several have become favorites. “For our anniversary Mass we had different songs that we all like – ‘Shall We Gather at the River?’ ‘One Day at a Time,’ ‘Heart of Jesus,’ which is a favorite for a number of people in our parish, ‘Lord When You Came,’ ‘When You Pray,’ ‘How Great Thou Art.'”

The most gratifying aspect of being an organist for this many years is the fact that Schumacher still has the ability to perform. “I enjoyed the people who sang with me and when I needed help I could call and they pretty well showed up. Some of the people at church said, ‘You can’t quit because we don’t want you to.’ For our anniversary, all these people showed up (who used to be in the choir). It gives you a mighty good feeling. They tell me they appreciate me. It was nice to see those people there and talk to them.”

After a lifetime of service to her church, Schumacher said she was glad to do what she did. “It cost us a lot of free time … but when you’re younger you don’t mind. It’s just a way of life and you just do it. There was nobody to replace me.”