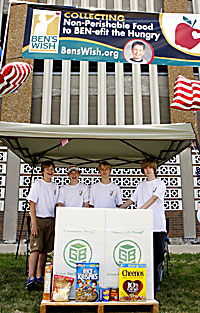 With volunteers helping at two tents set up at entrances to the fireworks event, seven large cardboard boxes of nonperishable food items were collected.

“It breaks my heart that the loss of Ben has to be the motivation for an event like this,” said Peter Delain. “However, we cannot spend our lives looking back. In the end, it is the trail that you leave behind that people will see.”

Food was also collected at the Liberty Bell Ringing event, which took place on the front yard of the Brown County Courthouse in the afternoon. The first 200 children who brought a nonperishable food item to this event received a $2 bill courtesy of a generous donation from Downtown Green Bay. The $2 bill commemorates the signing of the Declaration of Independence on its back side.

Jeff Mirkes, executive director of Downtown Green Bay and planning committee member for the annual Fire Over the Fox event, worked closely with the Delains to implement Ben’s Wish. He brought his five kids, along with a number of canned food items, to the Liberty Bell ringing and saw it as perfect way to teach his children about the life of Ben and the need to help others.

“I was honored that the Delains chose this Fourth of July event to be the kickoff for Ben’s Wish,” Mirkes said. “It meant a lot to me.”

The logo for Ben’s Wish is a silhouette of a boy holding up an apple. It is a fitting symbol for a young man whom his parents describe as being very generous from a young age.

Their Web site, www.benswish.org, tells of Ben’s final act of charity. While en route to their family vacation just days before the fatal accident, Ben spotted a homeless man asking for food at a highway interchange in Wausau. Searching through his bag of snacks he found an apple, rolled down his window and gave it to the man.

“It was Benny giving that man his apple. That is what we feel was his legacy. It was food and it was given to the people that were hungry and that is the ripple we need to create here,” said Becky.

Mirkes said he would like to see Ben’s Wish continue. “I will gladly help to see this work grow,” he said. “I hope that 10 years down the road Ben’s Wish is part of all of our city-wide events.”

The Delains were very pleased with the food drive outcome. In remembering Ben, both mom and dad have found comfort through prayer and Scripture. They also believe Ben has inspired them in putting together Ben’s Wish.

“There have been so many little things that were messages to us that Ben was shining upon this event, said Becky. “He was in our corner on this one.”