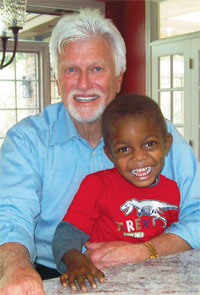 Dr. Ed Vogel shares a laugh with 3-year-old Salomon Frederic. Vogel and his wife, Barbara, Friends of Haiti medical mission volunteers, are caring for Salomon while he recovers from surgery to correct club feet. (Courtesy of the Vogels | for The Compass)

Some children, such as Salomon, require surgeries not feasible in Haiti. He was born with club feet, which caused him to walk on the outside of his ankles. Surgery to correct his condition was recently performed at Aurora Baycare Medical Center in Green Bay. The Vogels, who are caring for Salomon until his return to Haiti, first met him during a medical mission when he was only 15 months old.

“It took us two years to get the paperwork to bring him here,” said Dr. Vogel. “There was no birth certificate, so that took about a year. Every time you got one paper done, they wanted another one and another one. They needed to make sure that no expenses would be incurred by the U.S.”

Salomon’s family lives in a mountainous region. They walked two to three hours to receive care at a Friends of Haiti mission clinic. While the child is in Wisconsin, his family has no means to communicate about his well-being. Salomon has adapted to his current surroundings, said Barbara.

“He is very affectionate, a happy child and he loves to sing songs,” she said. “The Haitians may not have a lot of material things, but they have a joy for life and a hope for a better tomorrow.”

Despite not having electricity at home, Salomon has learned to point to the microwave when his toast isn’t warm enough and the refrigerator when he wants his milk colder. He is frightened by loud noises, is cautious about items with motors, and does not like stuffed animals or television with the exception of “Dancing with the Stars.” His love for singing extends to Mass at Resurrection Church in Allouez. The Vogels, who know enough Creole to effectively communicate with Salomon, make a point of sitting near the choir.

“He has a grandfather who is a grassroots minister in the Protestant church, so he is used to singing,” said Dr. Vogel. “Our hope is to have him walking and then maybe he can even run to his parents when he returns home.”

Friends of Haiti grew out of a parish twinning program in Memphis, Tenn. In 2000, through the program, St. Philip the Apostle Parish in Green Bay was paired with St. Anne Parish of Thomazeau. Fr. Larry Canavera, pastor at St. Philip at the time, saw an opportunity to reach out to people in dire need.

“It really came from other people’s awareness of discrimination against Haiti,” he said. “Dominicans were looking down on the Haitians as migrant workers. The Haitians on the border are people without safe water, without education, without infrastructure.”

Fr. Canavera, now associate pastor at St. John and St. Patrick parishes, Menasha, announced the plans for a medical mission at Masses. In March of 2001, the first group made the trip. Among the physicians was Dr. Jack Hale, who serves as chair for the Friends of Haiti Board of Directors. He has been a part of every medical mission since the organization was formed.

“It helps me with a sense of satisfaction,” he said. “Medicine in the U.S. is big business. In Haiti, I don’t have to worry about money. It’s simply about helping these people. All doctors are privileged to give back to your fellow man.”

“When we were first married, we thought about the Peace Corps, but we had three children in three years,” said Barbara. “So these are in essence our Peace Corps years.”

Many of the Haitian patients suffer from malnutrition, high blood pressure, diabetes, skin infections and digestive problems. Worms are common in many of the children. The average income per capita in Haiti is $1 per day. The majority of the families served are scratch farmers trying to provide for their families. Some resort to a diet that includes mud pies or dirt cakes, food items made from dirt, flour, salt, oil and a touch of flavoring.

“We started out as a medical mission, but we quickly realized that the real disease is poverty,” said Barbara. “To cure poverty you just don’t provide medicine. You provide clean water and education.”

Friends of Haiti expanded to include water, education, agriculture and economic development mission groups. The organization has partnered with Assumption Parish of Broadview, Ohio, which has assisted in efforts to provide clean water.

“I just returned from a meeting in Cleveland,” said Fr. Canavera. “We are gaining access to harvesting more water and continue to pursue purification methods and new alternatives. It’s all a part of the circle with the medical mission. We also

need to help the small schools with vocational education to improve their livelihood.”

Only 50 percent of children in Haiti go to school, and 10 percent of the schools are run by the government. Anyone can start a school as a business. Students attend classes through the sixth grade before taking an exam to determine if they qualify for further education.

In addition to mission trip volunteers, supporters in the U.S. are essential to the success of Friends of Haiti, said Dr. Hale.

“We need as much support here if not more,” he said. “We have parishes nationwide that help us. The volunteers that help us prepare for the missions are so valuable. Preparation is a full-time job.”

Volunteers pack pill bags for the trips. Every patient is given 90 vitamins, one for every other day to cover the six-month span.

“We can really feel the energy as we build closer to the mission,” said Fr. Canavera. “The moral support, prayers and encouragement are so important. There is a lot of heart involved in this effort and the goodness of people emerges.”

Medical personnel from throughout the U.S. donate their services to Friends of Haiti. Baltimore, Tucson, Olympia, Wash., and parts of Illinois and California are all represented. Fr. Canavera also points to volunteers from the Haitian American Nurses Association in Florida for their dedication.

“They are a real asset,” he said. “Their knowledge of the culture as well as the language is really helpful.”

Both Dr. Hale and Dr. Vogel would like to see more volunteer physicians from Northeast Wisconsin.

Volunteers pay their own travel expenses. Fr. Canavera said he hopes the organization can raise more money to provide for food and transportation costs while in Haiti. Transportation costs are especially high due to the country’s poor roads. He estimates that a car with a driver is $220 (U.S.) per day.

Among the goals of the medical committee is to improve follow-up referrals, surgeries and evaluations, said Fr. Canavera.

“We can always use a lot more people,” he added. “We need more doctors, dentists, nurses and eye care professionals. We now will be able to do cataract surgeries. The Haitian people have a lot of eye problems because they are exposed to the sun.”

While the work continues, he is encouraged by the progress.

“Trust has been built,” said Fr. Canavera. “We have built relationships and one of the rewards is seeing the children grow each time we return.”