Volleyball is a year round sport for Ashwaubenon High School senior Hannah Steward. In addition to playing for the Jaguars, she plays on a club team through the Wisconsin PoWer program and is currently the captain of her summer league squad. Steward, a varsity starter at outside hitter the past two seasons for Ashwaubenon, hopes to play collegiately.

“I didn’t know if I wanted to play in college because I thought it would be too hard with school, but I definitely want to play,” she said. “I love it too much.”

While her passion for the sport is evident, the opportunity to help people in need won out for a week during her junior year. Last October, Steward missed a week of the volleyball season to take part in a mission trip. Inspired by the outreach efforts of her grandfather, John Gracyalny, she joined the water team of Friends of Haiti for service in the mountain village of Grand Boulage.

“I had heard about how great an experience it was,” said Steward. “I had never been out of the country and it involved helping people, so I thought to myself, ‘Why not go.’ It was also a family thing.”

Her mother, LoAnn Steward, and grandmother, Lois Gracyalny, also made their first mission trips to Haiti. It marked the sixth trip for her grandfather.

One of the tasks of the mission was to repair the water pump that John installed four years ago.

Hannah spent most of her time in Haiti with the children in the village.

“I helped out with the little kids,” she said. “We had arts and crafts and coloring books for them. They made bracelets. I played soccer with them, which was really fun.”

The children were among the many in Haiti who do not attend school. A five-year-old boy, Elo, quickly sought out Hannah.

“He latched on to me the first day,” she said. “We were buddies the whole time.”

When he didn’t join the other children one day, she became concerned.

“His family was the poorest in the area,” she said. “We brought the translator to his house. We were told that he didn’t have any food. He was lying on the floor crying because he was so hungry.”

Members of the mission group discretely gave food to Elo and his family.

The spirits of the children stood out, said Hannah.

“They are so cute and are always smiling,” she said. “They just love to hang out with you. We take so much for granted living here. It really opened my eyes. People my age really take a lot for granted.”

She attempted to play volleyball with the children, but they were more comfortable with soccer.

“They kicked old bottles around,” she said. “We brought two or three soccer balls. It was all rocks and they were playing in bare feet. One of the new balls was in pretty rough shape from the rocks. It had a hole in it by the end of the week.”

Following the trip, Hannah and LoAnn, members of St. Elizabeth Ann Seton Parish in Green Bay, gave a presentation about the mission as part of the parish’s SEASons of Faith program.

“We were invited to serve on the Dignity of Life Committee at the parish,” said Hannah. “We are trying to get more parish involvement in Friends of Haiti.” 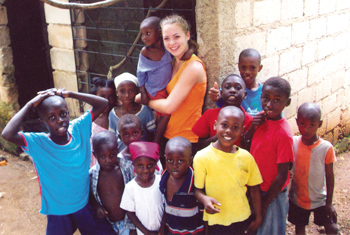 Hannah Steward, a senior this fall at Ashwaubenon High School, shares time with Haitian children during a mission trip in October of 2008. Steward, a member of St. Elizabeth Ann Seton Parish in Green Bay, will be returning to Haiti in November.

Hannah’s family has been dedicated supporters of the organization. LoAnn and her sisters, Lynelle Diestler and Lori Gracyalny are co-owners and operators of Crystal Coffee Café and Beanery in Ashwaubenon, which has served as a drop-off site for item donations. They also sell items to raise funds in support of Haiti, and hosted a fund-raiser last December.

“The fund-raiser was a Christmas gift for my grandparents,” said Hannah. “We had a silent auction and people gave donations to attend. We raised more than $10,000.”

Hannah, who wants to be a medical doctor, will be returning to Haiti in November. Fortunately, this year’s mission trip follows the volleyball season.

“I love kids,” she said. “I want to help the kids more. I like the feeling of helping people.”