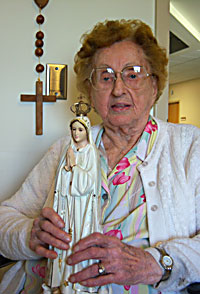 Margaret Schneider, 100, holds a statue of Mary in her room at Manitowoc Health and Rehabilitation Center. (Benjamin Wideman | For The Compass)

Adopt-a-Priest coincides with the Year for Priests, which was declared by Pope Benedict XVI. It began June 19 – four days before Schneider’s 100th birthday – and concludes June 19, 2010.

“Priests need prayers like everyone else, so that’s why I wanted to do this,” said Schneider, gently holding a green rosary in her hands while sitting in a wheelchair in her room at Manitowoc Health and Rehabilitation Center. “There are a lot of good, holy priests out there. We should all be praying for them. We should all be praying for everyone. … I pray all day. I pray every day. I really believe in prayer.”

Schneider says she sometimes relies on God to help her with her prayers.

“I’m 100 years old, so sometimes I forget things,” she said. “If I forget who I’m praying for I say, ‘Dear God, I don’t remember. Do you know which priest I’m praying for?’ He always reminds me.”

Fr. Ashbeck, 67, has assisted at St. Clare of Assisi Parish in Surprise, Ariz., since 2007, shortly after leaving his native Wisconsin for “the warmer, nicer weather” of the Southwest with the blessing of Bishop David Zubik.

“I’m very honored and privileged to have Margaret pray for me. I can always use prayers,” said Fr. Ashbeck, also a clinical social worker at Desert View Counseling and Consulting in Peoria, Ariz.

“I hope that when I turn 100 years old I will also be praying for priests, and all people,” he said.

Fr. Ashbeck grew up on a modest farm in tiny Blenker (30 miles west of Stevens Point). At age 14, he left for St. Lawrence Seminary in Mount Calvary.

He has come a long way since – literally and figuratively.

“On Easter Sunday (at St. Clare of Assisi) I had the 11 a.m. service, and there were at least 2,200 people in church,” said Fr. Ashbeck, noting the church opened in 2000 with just a few hundred parishioners and now boasts a congregation of nearly 7,000 people.

Schneider, meanwhile, was born in Wausau and attended St. Mary’s, a K-8 school. She has attended church religiously ever since.

“Sometimes the nuns would let us play tag in the church if it was too cold outside,” Schneider said with a smile.

Schneider’s father, John, died of influenza when she was 13 years old. Two years later, her mother, Mary, passed away.

“They said she died of a heart attack, but I know she died of starvation,” Schneider said. “We never had much money or much food. I know what it’s like to be poor and hungry. My mom would always say, ‘OK, everyone eat. I’ll eat later.’ But I know she didn’t because we didn’t have enough food. Praying was very important to me after my mom died.”

Schneider and her four younger siblings split up, living separately with various relatives. She became a teacher, with stints in Wisconsin, Iowa, Minnesota, Montana and California. The bulk of her career was spent in Oxnard, Calif., where she taught sixth grade until the age of 80.

“They never asked me my age, and I never told them,” Schneider said. “I liked what I was doing. Jesus helped show me the way.”

After retirement, she moved to Whitelaw, but her residence didn’t pan out.

“I said, ‘Dear Blessed Mary, please help me find a home,’ ” Schneider said. “I went to a lady who owned a hardware store, and she said there was a teacher moving out of a duplex and I could move in.

“It was the second time the Blessed Mary helped me find a place to live – once in California and once here. I knew she would help me.”