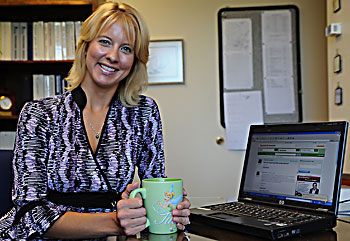 “My family and I parked cars for 38 years in a field right next door to Lambeau Field,” she said. “Since I was a tiny little girl, I have heard the person singing the national anthem, whether it be a child, an adult or a superstar, and have wanted to go over there to sing.”

She wondered if the dream would now become a reality, especially since the diocese teams up with the Packers each year for the Bishop’s Charities Game, which benefits Catholic Charities.

“Now that I work at the diocese, I wonder if there is any way I could ask someone about the Bishop’s Charities Game,” she told her friend. “Then I thought, ‘No, I’m not going to cross that line.'”

As it turned out, she did not have to cross a line. She only had to sing.

Rottier is an accomplished singer. She has a bachelor’s degree in music education from UW-Green Bay and has performed in St. Norbert College’s Music Theatre for the past 18 summers. On Aug. 5, she was asked to lead diocesan employees in song at a morning Mass celebrated by Bishop David Ricken at St. Joseph Chapel, located on the diocesan grounds.

Later that morning, Rottier received a call from Amy Kawula, advertising and marketing manager for The Compass, who serves on the Bishop’s Charities Game planning committee. “She asked if I wanted to (sing the national anthem) and I about had a heart attack,” said Rottier. “I was so excited and just flattered and honored. I posted it on my Facebook page and like 50 friends in 10 minutes replied saying, ‘I’m so happy for you.’ They all know it’s been one of my dreams.”

Rottier said she isn’t intimidated by singing in front of tens of thousands of people. (Last year’s Bishop’s Charities Game had 69,675 people in attendance.)

“I’m so much better in a group of 2,000 than in a group of two, but this will stretch it a little further than 2,000,” she said. “I like performing and being in front of big groups. It’s where my home is. It’s where I’m most comfortable.”

“As a child I auditioned (at St. Norbert College) 12 times and never once made it into a show,” she said. “When I was 19, a teacher said, ‘Why don’t you come over to audition?’ and I said, ‘Oh no, they hate me.’ Sort of that child stigma, but she convinced me to audition and that was my first show in 1993.”

Every year since, Rottier has performed in summer musicals at St. Norbert College. “I’ve just been playing all different kinds of roles: chorus, leading roles, supporting roles,” she said. This summer she played Marian Paroo in “The Music Man.”

“I met so many amazing people through this and built so many great relationships. Every summer it’s like coming back to this family you only see once a year,” she said. “Most people go on vacations in the summer. I do a show.”

As Catholic schools director, Rottier’s task is to help foster Catholic identity in all 62 schools within the diocese. She’s also asked to help nurture the spiritual development of principals, staff and students. She will travel to schools and parishes, serving as a resource person to school system presidents, principals, teachers, pastors and parish directors.

One new project she’s helping to implement is MAPS, a testing program for teachers to evaluate each student’s standing in the classroom.

“When you talk about differentiating the curriculum and meeting the students’ needs, which is what we do best in Catholic schools, this tool is going to be fantastic in helping teachers do that,” said Rottier. “You can see exactly where students have strengths and where they have areas for growth.”

Rottier brings more than 10 years of experience as a Catholic school principal to her new post. “This job is all about serving the school system presidents and principals, to help them apply educational initiatives locally,” she said. “Not everybody has the same resources and the same personnel to be able to take what’s good and what’s working really well. Coming from a perspective of principal, I understand some of those limitations.”

Rottier is a member of St. John Nepomucene Parish in Little Chute, where she cantors and serves on several committees. She is married to Ryan Rottier and they have three children: Cameron, 10, Lauren, 8 and Madeline, 4.